Panzerfaust Records, submitted by yeahiamghos.Panzerfaust Records is a large record company that hosts some of the most popular and pear figured bands of today. Oh, did I mention they are all Neo-Nazis and furiously masturbate to a picture of Hitler over a swastika flag, and think the Jews are putting sea monkeys in bottled water? These are the guys that were so unpopular in high school that the A/V club wouldn't accept them and they had to run into the loving arms of bigotry just to fit into any group that would take them as a member. The Neo-Nazis are not picky when it comes to new members. They will take in a moldy sack of potatoes if it promises to hate black people with all of its tasty potato heart. These folks are not new to the Internet. In fact, racism was probably the second thing ever on the Internet after pornography. This is a free country and it is totally within their rights to express their love for an ignorant ideology that was spawned by the biggest group of fuckups who only knew how to destroy things and then kill themselves once their great empire fell within a decade. But the third reich's word lives on, and that word is "buy our products!" 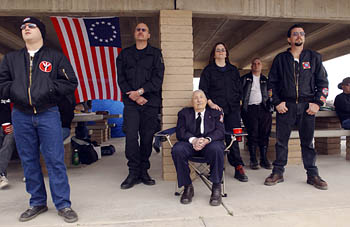 Seriously, look at the amount of crap you can slap a swastika on and sell it for $18! Hitler would be rolling in his grave thinking about the millions he lost when he was busy looking for the Lost Ark instead of marketing his propaganda to the paying masses. Well, I'm sure all of the future Neo-Nazi musicians are plotting the upcoming race war from their parents' basement and growing large on chalupas made by Indian workers. Check out their forums, and be sure to use your freedom of speech to let Panzerfaust Records know what you think of their shitty racist ogre music.