The year was 1987. Dungeons & Dragons was hugely successful and headed towards its 1990s slump. The father of D&D, Gary Gygax, unleashed his genius and the full spectrum of his autism on a science fiction setting. He outlined the setting and system and Frank Mentzer and Kim Mohan interpreted his ideas. The result was New Infinities Production's forgotten Cyborg Commando. The game was set in 2035 following the invasion of the earth by a nefarious race of alien "xenoborgs" intent on harvesting earth's resources and looting mankind's music collections (seriously). It combined Traveller's obsession with hard numbers and crunchy math with the worst of D&D's chart mania. Believe it or not, it's even worse than the title suggests. Thanks to multiple readers for suggesting this one! 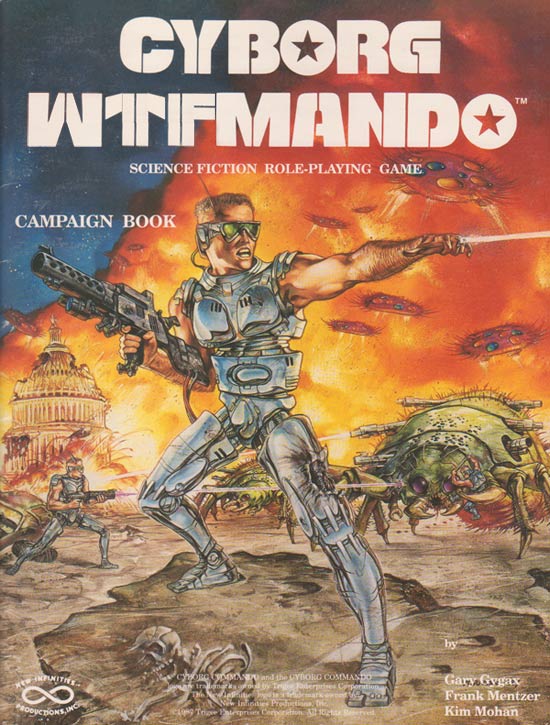 Steve: Whoa this game looks sweet as heck. Pummeling bug monsters with hyper beams in the scorched wasteland of Washington D.C. is about as bad ass as it gets. And you get to wear turbo diesel shades while you do it.

Zack: Like Spielberg's War of the Worlds played on 21st Century American fears of terrorism this reflects the prevalent, late-eighties fears of giant hairy fleas exploding Washington in their gem spaceships.

Zack: "You want our skeletons? Come and get them, me-breath!"

Steve: You know he's seeing everything in red with cool words flying around like "kick a butt" and "blast that big dude in his eye guts 99.9% success."

Zack: The chief advantage of gleaming cyborg bodies is you can just forget about clothes. Do you put pants on a truck? Let that chrome breathe. Air it out, metal man.