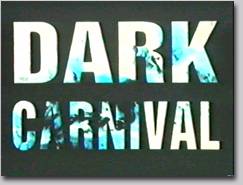 Overview: It ain't no carnival, but it sure as hell is dark. This video is approximately 950 thousand million minutes of non-stop running across sets, shouting, and blurry, lurching shapes. However, there is a clown and some psycho with a paper hat, so I guess it's not all that bad. No wait, it is.

The Case For: If you decide to stay at home and watch this movie (instead of going out and getting shot in a drug deal gone bad), this film just MAY HAVE SAVED YOUR LIFE.

The Case Against: You'll need those drugs to make this film enjoyable. 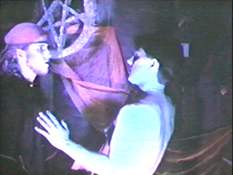 Is "Dark Carnival" running on the Unreal engine?

Sometimes you find a movie which is so incomprehensibly bad that you don't even have the slightest clue how to describe the sheer awfulness of the film. While some videos may have a silly plot, laughable acting, or gradeschool caliber special effects, it's hard to encounter a single movie that wraps all these flaws into one festering package of failure. Luckily, I have had plenty of experience watching these slopbuckets of digital excrement, so I'll try my best to explain how much pain "Dark Carnival" will inflict on you.

The first thing you'll notice about "Dark Carnival" is the fact that it is indeed very dark. I'm not talking "sitting in the park at eight o'clock" kind of dark, I mean "drunkenly stumbling around in a closet while some Nazi war criminal throws a quilt on top of you and proceeds to bash your head in with an aluminum baseball bat" dark. Adding to the "dark" aspect of the film that we have already established, director Eric Worthington shrewdly elected to shoot the entire movie on 16mm film. Apparently the movie was then transferred to a VHS tape which was left sitting in on the dashboard of the costar's 1984 Honda hatchback for a few days. After bringing it in from the 120-degree heat, I think they spilled Tang all over the tape and dipped it in Lemon-scented Pinesol, because the physical quality of this movie is unbelievably shitty. Every scene resembles an oil spill of vaguely defined shapes and blobs, all merging together into one orgy of inky-black bile. A popular game to play while watching "Dark Carnival" is called "What the Fuck is That?", where contestants are challenged to guess if the main object in the camera's focus is an actor, prop, or film defect. The only downside to this game is that you'll never really be able to figure out who was right, unless you hunt down Worthington and get him to stop directing gay porn films long enough to beat an answer out of him. 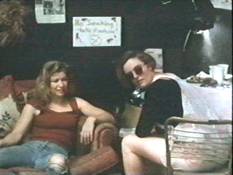 This lady wears sunglasses through the whole film. I don't blame her.

Back to the movie: contrary to what the title might imply, this film has nothing to do with carnivals. There's not a single damn carnival in the entire film, so I'm assuming the title just refers to where they found the majority of actors to "star" in this wad of cinematic filth. Much like the plot from "Ghandi", this film is about a group of 10 or possibly 500 people who decide to create their own haunted house for Halloween. To further reinforce the premises that they're building their own haunted house, the actors repeatedly say things along the lines of "I can't wait until our haunted house is built!", "it sure it hard work building our haunted house!", and "after we're done building our haunted house, let's finish up our plans to MURDER THE POPE." It wouldn't be so bad if this montage of "building the fucking house" took under eight hours, but it's stretched out so long that you'll have at least 18 grandchildren by the end of the film.

So, in summary, they're "building a haunted house". The various people working on the house are introduced to some homeless guy that lived there, who walks around most of the film wearing a wonderful paper hat. He's also psychic or telepathic or something (I think), which apparently is the natural result of wearing a Burger King-esque hat. Soon an evil building inspector comes by and knocks on the door three times, but thanks to the stellar dubbing abilities of the preschool kids who edited this film, all we hear is two knocks. The film goes dead silent when the third one hits, the first of many embarrassing errors this movie vomits on us. The evil building inspector demands to see all kinds of paperwork for the haunted house, and he tries really hard to find some violations that the house is breaking so they can be shut down. He does such evil things as measuring the width of a doorway and looking at the fuse box. Clearly this is a man sent by Lucifer himself!