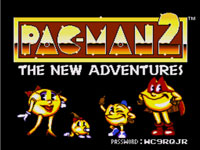 At a Glance: Introduction to video games happened for me at an early age. My first game came with the NES and donned the name Super Mario Brothers (the one bundled with Duck Hunt not the one in arcades). Since I am only 22 years old, the Atari predated me and I only experienced PacMan after playing games that are actually good. I can understand playing PacMan when nothing better existed but in all reality, PacMan doesn't have anything interesting. Think about it: PacMan could possibly take the cake as the most repetitive game of all time. Oh, sorry, I guess the fruit changes each level. In hindsight, though, every game from that time kinda blew.

Anyhow, PacMan gained a huge reputation during a time when people were still experimenting with a lot of heavy drugs and like anything that gains popularity, a ton of shit flew from it in any attempt to make money. So here we are... stuck with games like Packmania 2. Though I guess it could always be worse. 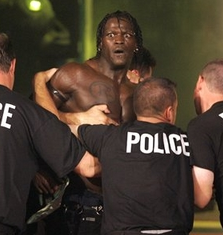 This joke is played out more than PACMAN. Ha ha ha!!!Story: Our ghost/pellet eating hero of yesteryear now lives as a hallow shell of a PacMan (ha, pun) in this bizarre side scrolling shit heap (ha, alliteration). The game starts out with his old cranky bitch Ms. PacMan wanting him to go get some milk for the baby. Since she is still "Ms." PacMan, I assume they live in sin and have a bastard child. This explains why Satan's ghosts chase Pacman and PacMan's fear of everything (more on this later) actually serves as a metaphor for living in hell. Back on point, the bastard demon child needs some milk and you must make sure PacMan doesn't fear everything in the game. Seriously, if he so much as sees his own shadow, he freaks out and runs in terror.

Supposedly, PacMan has at least 4,632 emotions in this game but the only emotion I ever witnessed was terror. Perhaps having a wife and kid softens a man up... perhaps all the time spent haunted by ghosts have broken his already fragile mind. I didn't get to the "visit the psychiatrist" mission in the game so I don't have an answer for you; sorry guys.

After sneaking past a dog, eating apples, getting hit in the face with a door, suffocating a farmer under hay, and pissing off some chicken, I made it to some city where I visited an arcade. I know I don't have to say it but yep, the old PacMan in all its "glory" is the only game in the arcade. Though the original PacMan pretty much blows, it still looks great in comparison to this game. I guess you could market PacMania 2 as "a bunch of shit with the original PacMan in it!" It also seemed a bit strange that I pranced right through downtown Pacmanville and no grocery stores were open to sell milk. In fact, apparently everyone in town tugs on the utters of one "cow." However, PacMan's stubby legs were no match for a milk bottle placed out of reach (the game's first boss fight).

I finally figured out to shoot a nearby crow right as PacMan wandered close enough to the bottle so that when the crow attacked PacMan, it also knocked down the bottle. So although earlier in the game, shooting a crow made PacMan run in terror, I now have to shoot a crow to solve a puzzle. Great! After the crow pecked PacMan to a bloody pulp, PacMan happily tugged on the before-mentioned "cow "(which had bull horns) and had some nice, unpasteurized "milk" for his child. Too bad the kid died of hunger by the time I figured all this shit out. Oh well!

What?Gameplay: I couldn't really control PacMan at all, directly, in this game. He either roams to the left or right depending on what he happens to be afraid of at the moment. Basically I had to shoot things with a slingshot as he scampered along, looking around in terror and confusion like if he never left his house before. Depending on what I shot, PacMan usually took some reaction (usually confusion). For example, when I barraged an apple tree with rapid fire, the delicious red fruit fell down in front of him and no matter how depressed PacMan was about his life, eating one stinkin' apple made him strut like no one's business.

Sometimes, if ghosts attack PacMan at random, you can shoot a yellow pellet down his throat and make him "Super PacMan" who flies around eating the poor saps. It should be noted that Super PacMan can fly but won't do anything else like, oh, GET A BOTTLE OF MILK.

The "C" button also causes PacMan to "LOOK! LOOK!" in the direction you press the D-pad. Sometimes this would even change the direction he decided to travel but not always. Most of the time he just looked at me all pissed off but considering he was mostly sad or upset with me, I stopped caring pretty quickly.

Graphics: The graphics are cartoon-like but overall not too bad for a Sega Genesis game. As mentioned before, PacMan has a butt load of facial expressions though most seem to have something to do with "complete and utter fear."

I really can't make fun of the graphics since in 1994, everything looked just like this game or worse. Sorry guys, the graphics aren't that bad. 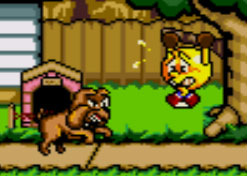 Oh that PacMan!!!Enemies: Pretty much everything in this game wants PacMan dead. Some of the more obvious enemies were the goofy looking ghosts and some witch that controlled them. Other than that, I encountered a pissed off dog, cat, hot dog vendor, crows, chicken, bull/cow, farmer, bees, a spider, a mailbox, a door, a windmill, myself to some extent, a rock, and a skateboard all in the first level that immediately wanted our spherical hero to bite the dust. I guess you can also go as far to say that his family could be lumped into the "enemies" category since none of them went out to help PacMan do a damn thing although the opening sequence explained that the baby, "is so hungry that she scares ghosts!"

Fun: The novelty of torturing PacMan by shooting him in the face (or shooting anything that could possibly harm him) wears off in about ten minutes. When it comes down to it, the game is a point-and-click type but with no control over the main character and everything you click causes some kind of harm.

PacMania 2 reminded me of those games that are pretty bad but due to some bizarre interest, you keep playing. I can hardly say I had any fun but a masochistic curiosity overcame me and I continued to play the game regardless of how much it sucked.

Defining Moment: The Pac-strut that initiated after eating an apple. That fucker sure loves apples. The music was pretty kickin' rad too.

I decided to get a little experimental and make a video since people like moving colors and lights and shit. In the next article I will have more time and you can expect a "fine tuned" and edited video rather than a Let's Play knock-off. That is, if I don't get extremely lazy or busy as I am prone to do. With that said, expect 80% of the following video to be absolutely boring. Enjoy!