Aliens: What's their deal? Why do they come here? What do they look like? These are just some of the questions Little Sticky Legs purports to answer. Photographer Steven Hirsch kindly allowed alien abductees to share their experiences and childish drawings, along with an Instagram of themselves apparently shot with the "Glenn Beck crying" filter.

The aliens' motives are questionable. They handed Lisa a couple babies for some reason (what are they, the stork?) and gave her an unwanted piercing in the back of her head. They gave Saundra an orgasmic experience that was like "making love with God." They traveled millions of light years just to tell Terrance to shut up (I don't blame them). 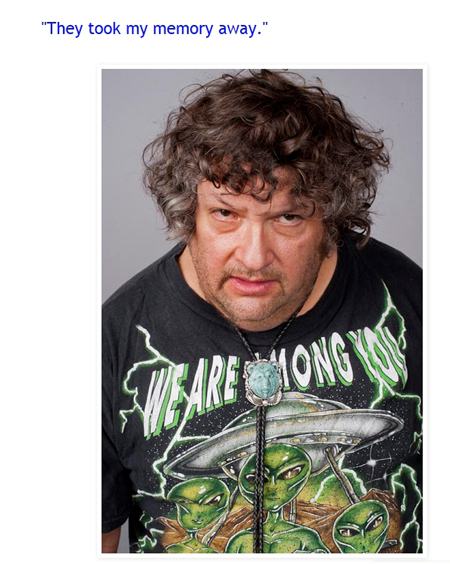 They also came to take Jeffery's memory away, an ordeal he recounts in astonishing detail:

It was a human hybrid. He looks like a black man but he had a strange voice that wasn't like black in origin. He sounded like a white man.

Anyway it appears to be about four feet tall something like Sponge Bob. So Sponge Bob was walking with me and I'm getting tired. I said, "I don't think I'm going to make it to Bell Rock today." And Sponge Bob says, by the way we communicate telepathically, I've never ever heard a voice, Sponge Bob says, "Yes you are, you're going". All right. All right, I'm going.

"My child, when you see one set of footprints, it was then that I carried you," said SpongeBob. "Dahahahuahauhahuaha! Barnacles!" 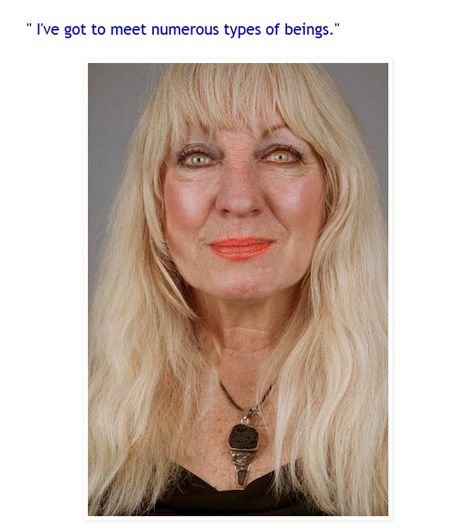 Meanwhile, Cynthia, who claims to have been created with alien DNA, is just a huge braggart:

I've got to meet numerous types of beings. I've met Salamander beings and I've met Greys, various different types of Greys. I've also met the Blue Arcturians which are incredible. They all have their own personalities and their own purposes. So I've met Blue Arcturians. I've met Andromedans, the Assyrian Warriors of Light. I've met the Sirius Nephrons. I've also met the Cat People that are from Sirius. I've met many. I've actually seen people that can shape shift from human looking to Reptilians.

The best part of this blog is the artwork, which doesn't clarify anything at all and just adds more questions. Nancy's drawing helpfully indicates "the nice one" (the only one with hair) but neglects the cute one and the funny one altogether. Jill's drawing is wonderfully insane, with 4D helpers marging out of her head and 7D light beings floating above. According to the Zeta Reticulans, we've got extra DNA we're not using. Hopefully scientists will develop a process for getting rid of it. No more wasteful genomes for me, thanks!

Finally, Lillian included a crude drawing of a cactus man with Princess Leia hair injecting her with a needle. Maybe the aliens just want to get us high? The mountain of evidence is overwhelming.