Saturday, Nov 27, 2004 by Reid "Frolixo" Paskiewicz
Know of an awful site? Send it to us and become a hero!

Street Style, submitted by eThug. As a patron of Metro-Detroit, I am painfully aware of middle class white kids trying to act like inner-city thugs. Detroit is like a reverse Oreo, with the center of the city being comprised of mostly black citizens, while the white people mill around the edges, occasionally risking going inside for a sporting event or concert. Robocop keeps the peace between the city proper and metro area. But it's common for pasty young white folk in this area to say "aww yeah I'm from Detroit dawg", when they are closer to Ann Arbor's coffee houses filled with pretentious twats with acoustic guitars on their back discussing the merits of Nietzsche when they only read the preface. You think Eminem is bad? Well I had to go to school with guys who make him look like the second coming of Smoky Robinson. 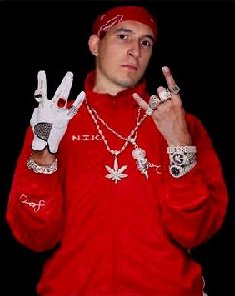 I might as well talk about the awful link instead of just bitching about my regional area. This is a urban clothing site that allows people to upload their pictures, and then members can comment and rank it. I thought all of them were pretty bad, but I'm a jeans and t-shirt guy and play World of Warcraft so my opinion doesn't count for much. I linked the worst rated pictures of sad white guys trying to be all thugged out with their gaudy diamond rings and jumpsuits. You can go ahead and leave a comment if you feel like registering, but it's probably not worth the bother. These people are doomed to failure, and will die alone and unloved.