Perhaps I overuse the term "crazy" in this column. Not that it's necessarily uncalled for: If someone thinks lizard-people are a) out to get them or b) sexy, I'm going to feel completely justified in questioning their sanity. Lazily, I thought to call the woman behind The World According to Kristina crazy, too, but then I realized her problem isn't that she's crazy, but that she's completely deluded into thinking she understands concepts that go way over her head.

The World According to Kristina is a blog "dedicated to exploring the higher self & higher consciousness, deciphering ancient symbols, rituals and myths anew," which sounds sort of vaguely spiritual but mostly like pseudo-academic horseshit, because that's exactly what it is. Well, alright, exactly what it is is mostly posting pictures of things that have the same general shape, passively implying there are similarities between these things, and writing what looks like bad poetry underneath the pictures. 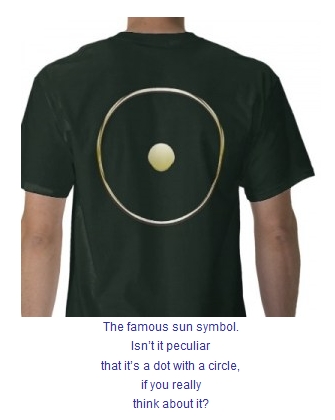 Still, this woman would be accepted in society. Not her ideas, mind you: She'd be smile-and-nodded at endlessly everywhere except the class she teaches at the health co-op / learning annex. But she's not aggressively, anti-socially insane, and her ideas don't promote violence or paranoia, so as a society, we would be completely tolerant of her. Would you be interested if a woman came up to you and started babbling about Masonic imagery, and instead of following that up with mutterings about the Illuminati, she started talking about chakras and third eyes? No, absolutely no one would, but you would sit there politely and feign a few "oh, wow, I didn't know that" comments. You know you would. I know I would. It's our natural politeness and fear of social aggression getting the best of us.

Through the magic of the anonymous and impersonal Internet, though, you can browse this woman's mind-ramblings at your leisure, which creates a whole other layer -- a funny layer, as opposed to one of silent, passive-aggressive misery. Laid out on a screen, the "symbology" becomes hilarious. Did you know we have kind of a sun in the middle of the Earth? No, you didn't, because we don't - we have a very hot core. But somehow this is relevant to the idea that the sun is symbolized by a dot with a ring around it. It's a very important symbolic connection! That's the great part about this blog: It's almost some sort of karmic revenge. Now, instead of having to listen to this woman when you accidentally run into her at the farmer's market, you can laugh at her without her even knowing.