Princess Selina Desire, the KattGoddess of Love, submitted by Angeliquus. I'm as big a comic book nerd as the next guy, but I never understood that juvenile desire amongst some comic connoisseurs to turn escapist fantasy into reality. By that I mean dressing up as comic book characters or emulating comic book characters in real life public settings. Nothing good comes of it in any way, shape, or form. Wanting to be a hero is one thing, but wanting to dress up like Wonder Woman and go out in public is another and thoroughly embarrassing thing. There is no practical real world application for such a desire other than personal degradation. Really, what can you do? Go to conventions and get ogled by people even more desperate and pathetic than you? On Halloween, sure, but that's it. But then I guess attention is attention. 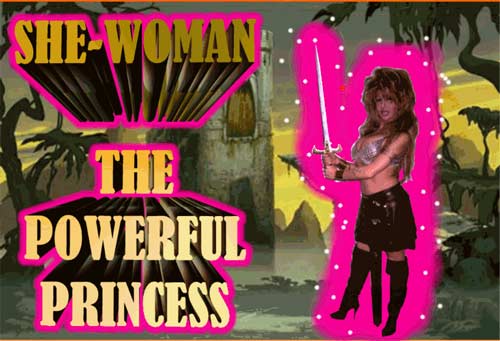 This here site is all about a crazy woman who wanders around comic conventions half naked pretending to be Wonder Woman. When she's not doing that, she's making fantastic artwork depicting herself as a princess and being awfully rough on the eyes with lots of painful colors and outfits.