Thursday, Mar 10, 2005 by Reid "Frolixo" Paskiewicz
Know of an awful site? Send it to us and become a hero!

Choronzon, submitted by Pocketsheep. I dislike goths. No, let me clarify that. I dislike goths who take themselves very seriously and think they are vampires and can shoot magic missiles from their eyes, and post on the internet about it with other "real" vampires. This site is full of the worst of the worst wannabe vampires I have ever seen. The site isn't much to look at and it hasn't been updated in a while, but the forums are filled with pure gold. I was thinking about handing this over to Spokker "Coffee Bean" Jones, but I am selfish and he owes me money. Check out these FORUMS and laugh your cares away. 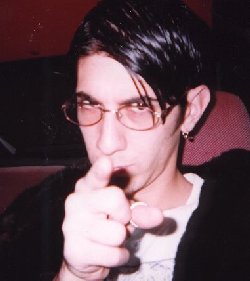 "Consider yourself hexed you mere mortal!"

"I have heard from sources that the pope is still in the hospital. Now would be an excellent time. Concentrate all firepower on him. I've tangled with popes in my time. Some of them did actually have significant power. But their power was as to nothing to the raw energies that run through our veins. We will be triumphant. I have foreseen it. But we must strike with a concerted blow, NOW! To become triumphant. Without the pope, the rest of the church will be in dissary and be demoralized by their sudden loss of their leader. This will confuse, distort, and ultimately destroy the churches ability to protect themselves from us. Strike now! And after the initial strike on our aged polish friend, put the fire in the hole on that damn college of cardinals. That way, the whole infrastructure of the church will implode and collapse, utterly destroying any power they had. We must disorganize and demoralize them to the utmost. Priority one on the pope, all others targets of opportunity. Exterminate with extreme prejudice. Think of the world as WE once had it. I implore you, people of the blood, to consult your spiritual ideaology on this idea. I will grant every warrior that goes into battle 30 legions of demons of the deep sea and 60 legions of demons of the utmost underground. Yours to command, indefinately with an ironclad contract. Consider well the possibilities. I will speak with my brother sorcerors on the matter as well, as they too will facilitate your attacks. We must, mobilize these legions of demons as we would an army. Our power will wither, blight and destroy the power the catholic's feeble world-view once held. We will explode it from its very foundations. Like a great tree it will crumble and rot, and when struck by our lightning bolt, it will destroy as a black powder explosive destroys, burning into ashes. I have risen from the sleep to many times through the cycle and turning wheel of aeons to pass this up. The christian poison must end. The ancient blood and the new blood must converge. This strategem, if pulled off correctly, will annihilate any chance of the catholic church from winning. "

Ok, first of all, do your really need to concentrate your power and use 30 legions of demons of the deep sea and 60 legions of the utmost underground to take out the Pope? I would think that a gust of wind or bumblebee would pretty much finish him off right now. These people are so far removed from reality that I really wonder how they can function in normal society. I mean, when they go to the grocery store and want to buy some beer and the clerk asks for their ID do they say "Thou shall not ask such petty things from Vidark Wolfmane, Baron of the 9 planes of rashes and dry skin! I am thousands of years old and have drank blood from the skulls of lesser peons than you! Pah!". Nah, they probably just order everything online so they don't have to deal with stupid mortals or that harmful sun, and can masturbate to vampire anime all day. Gotta love the future.