You know the best way to avoid moon monsters? Stay off the moon. The best way to avoid sharks? Stay out of the water. Horror-movie protagonists choose to ignore these words of wisdom in Apollo 18 and Shark Night 3D. Finally, the non-horror film The Debt rounds out a mixed batch by proving Sam Worthington is a real actor after all.

EXPECTATIONS: The fashionable joke to make here would be some kind of crack about not having seen Apollo 14-17, but I like to think we're better than that. Title aside, Apollo 18 is apparently more along the lines of Paranormal Activity On The Moon, which doesn't exactly get me excited.

REALITY: Is Apollo 18 the most pleasant surprise to come out of the found-footage genre in years? Absolutely! Is it a good film? Absolutely not! Well, maybe I'm being a little unfair. There are some very interesting ideas peppered throughout Apollo 18 that kept me riveted to the screen. The problem is that all of these interesting ideas are abandoned without a second thought by the time we reach the end.

The story goes that after the seventeenth lunar mission, NASA abandoned its Apollo program for reasons unknown. The following year, a top-secret eighteenth mission is launched and the footage recorded from said mission is released to the public in the form of this film. 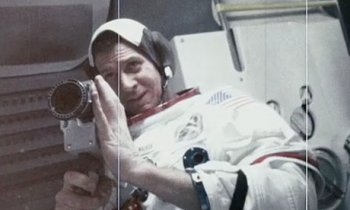 Watching me watching you watching me watching you ON THE MOON!The hook here is really the mystery behind everything. Not just the mission, but the film itself. Why the secrecy? Why wait until now to share it? Who found this footage and how? From the beginning, it is made clear that there is a fourth character behind the scenes, someone who wanted us to see this footage. Our eye is drawn to certain parts of the screen through unsubtle highlighting; certain footage is repeated for our benefit; everything points toward a silent narrator who is presumably one of our three protagonists, sharing his nightmarish experience with the world some decades later.

The ground crew, played by British actors Warren Christie and Lloyd Owen, has an interesting dynamic. You always get the feeling that they only get on because they have to; for example, arguments are avoided over who gets peas or carrots for dinner, and the film derides a lot of humour from this. When the shit hits the fan and they come under attack from weird moon monsters, the relationship becomes strained and actually reverses in an odd way. The commander (Owen) suddenly becomes more dependent and less in touch with reality. He repeats the pranks his cohort (Christie) previously pulled, only he doesn't understand them or why they are funny or even why they are jokes at all. Recording someone snoring to get proof for the sake of amusement isn't the same as filming someone sleeping all night long.

The dynamic reverses so thoroughly that not only does Christie become the stronger character, but also his former commander is reduced to the status of a gibbering psychopath who adopts a pet hammer. This hammer, oddly enough, is hilarious. Owen seems to have built most of his performance on how he holds the hammer, and the hammer itself has such a long handle I couldn't help but laugh every time it appeared on screen. I was literally laughing at a hammer. Not many people can deliberately elicit that kind of response, not even Timmy Mallet. Then, of course, this is reversed as well, and the hammer becomes a very real threat before the end.

Orbiting the moon, we have Ryan Robbins, who I had put the most money on being the guy behind the film, seeing as the first scene is his introduction. He does very little through the second act of the film, serving only as a bridge to Houston when the ground team loses communications. His main function is to reinforce the sense of isolation that comes with space travel. In the third act, however, he faces some moral dilemmas that would be very interesting if the film didn't end the way it did. 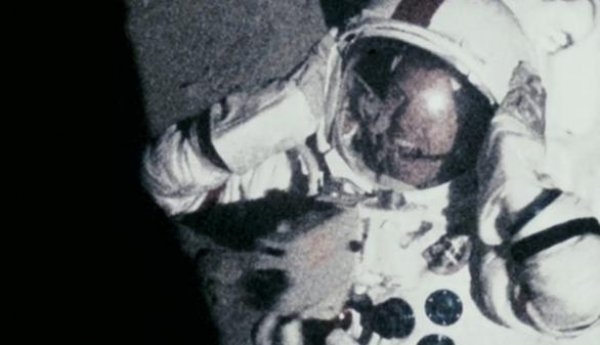 Leaving crabs in your helmet isn't very professional, now it it?

I don't want to get a reputation as the critic who always spoils the end of films, but endings are important. A perfect ending can absolutely define a film. Likewise, a bad ending can be defining in all the wrong ways. I think Apollo 18's ending will be what the film is remembered for, and not in a good way. So here we go, I'm going to spoil it now. Go stick the kettle on until I'm done if you're not into that sort of thing.

Now then, the best way to sum this up is to point out this is the first "found footage" film in which there is no possible way the footage could have ever been found. Not only do all of the characters die, but also absolutely none of the equipment is recovered, and some of it is even lost in space. I don't know how they expect us to walk out of the cinema feeling anything but pissed off when they do something like that. To establish and reinforce an idea, string an audience along on a mystery plot and then pull away any kind of satisfactory or logical ending is actually an insult. I wonder if there was maybe some studio interference at this point, like some of the higher-ups didn't want what they thought to be an anti-climactic ending to an entry in a genre known for its "everybody dies" denouements.

I only hope we get a future home release with an alternative ending that carries everything that was interesting about Apollo 18 to an actual conclusion. Failing that, there's definitely a lot to like here: the relationships between the lead characters; plenty of well-observed humour; a (very) few cheap scares; and the joy of the mystery before it gets buried. If I were you, though, I'd just wait and see for now. Keep it on your radar until it touches down... that's about as close to an astronautical metaphor as you're getting from me.

MINORITY REPORT: I think we can officially call the found-footage genre dead. If the Air Bud series has taught me anything, it's that once you do an installment IN SPACE there's nowhere to go but down. - Martin R. "Vargo" Schneider, Esq.