Thursday, May 19, 2005 by Reid "Frolixo" Paskiewicz
Know of an awful site? Send it to us and become a hero!

Velvet Dreams, submitted by Greedo. In honor of the last Star Wars movie coming out today, I've decided to give you a few slash fan fiction stories to get you in the mood for a "lightsaber" fight. This should remind you of how terrible the Internet really is and how we are doomed as a collective civilization. Enjoy. 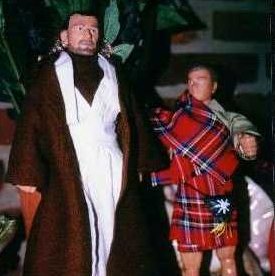 "Obi-Wan just kissed him again, sending his own love and lust to his Master. He thrust his hips back to Qui-Gon's waiting cock. Qui-Gon didn't need more encouragement, and slowly entered his Padawan until he was completely inside him. Obi-Wan gasped in pleasure when the invading cock touched his prostate, and bent his head to nibble his Master's throat. Qui-Gon knew he was not small and paused, giving Obi-Wan time to adjust to his size. A moment later, Obi-Wan looked at him, liquid heat in his eyes, a silent plea in them.

Qui-Gon began to rock in long, sensual strokes, shifting himself to be sure to touch Obi-Wan's inner place with each one. But soon he was unable to keep the slow pace and his thrusts became more rapid and deep, with Obi-Wan thrusting on each one, moaning loudly. With one final, deep thrust, he climaxed, filling Obi-Wan with his come and sending all his love through their bond at same time. Obi-Wan followed him just seconds later, using their bond to share his own love with Qui-Gon."

Gross! Anyway, I'm glad all this Star Wars crap is over so I don't have to hear anymore fanboys excreting their nerd musk while ranting about it. There are other slash fanfic stories on this site as well, but I recommend you don't read them. Actually I recommend turning off your computer and moving to Greenland to raise seals. Save yourself.