I'm The Guy Who Threw a Stone inside a Glass House

By now you've heard about me and what I did. I threw a stone inside a glass house. You probably also heard that you shouldn't do what I did. But what you haven't heard is my side of the story.

First up: you're probably wondering why I lived in a glass house. Let me tell you, it was a huge mistake. Not only are glass houses challenging to live in, they're also expensive. It cost me a fortune to hire a team of glass blowers to construct an entire ranch-style house out of pure glass. You should be criticizing me for that, not me throwing a stone.

Living in that glass house was a nightmare. There was nowhere to hide, because the walls were made of glass and it's not like you can put curtains around your whole house. That would be weird and creepy, and I'm not a weird or creepy guy.

As a lifelong nudist, it was also frustrating because the neighbors never respected my privacy. They just saw a naked man sitting there eating chili on a glass breakfast nook and got outraged. It's not my fault they stood around peering through my walls and objectifying my body. Especially that jerk Bryce.

The neighbors were just awful. None of them could grasp the incredibly simple concept of a glass house. Somehow, they thought that meant I wanted them to look at me. Get over yourselves, people. I'm just a normal guy. And just because my house was glass didn't mean you can knock on any part of it. Hello! I had a glass door. The welcome mat wasn't made of glass, and those go in front of doors. Idiots.

The worst part was there was no hiding from visitors. If somebody showed up to knock on my door -- or a random wall as often happened -- they could see me the whole time. No matter how quiet and motionless I remained, I was still completely visible. I'm not proud of this, but it's partly why I was inspired to dig a moat around the house. Another thing: city hall hates it when you do that.

It was also a nightmare for my dog, who died of stress after a mere two months. Between him constantly running into invisible walls and being driven mad by neighborhood critters just out of reach, he couldn't hack it. R.I.P., buddy. I sincerely hope there is no glass in dog heaven (or hell).

And those critters, they were the real headache. Every day birds would crash into the house and neighborhood cats would climb the walls and then freak out. My house was a real insult to the natural world, which never evolved the capacity to comprehend glass.

Sometimes you'd suddenly notice a coyote staring at you, and forget you were safely inside your home. More than once, I woke up to see a raccoon floating above my head, looking just as terrified by the situation as me. Throwing stuff just becomes second nature in a glass house. It's pure instinct. You see a varmint, and you grab the nearest thing and throw it, not realizing it's actually outside. 99.9% of the time this was harmless fun, but then the one time.... 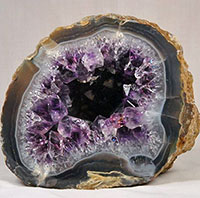 Totally agree! Doesn't apply to me, though. So you can stop repeating this idiotic expression, because it has no basis in reality and only serves to slander the character of a good man (yours truly). I threw a stone, not multiple stones. Technically, it was a geode, which I don't think even qualifies as a stone.

It just so happens that the geode struck a real weak spot, and caused the whole house to shatter. I'd like to say it was my expert throwing arm, perfectly honed from 6 seasons of high school football, but it was clearly the fault of the union glass blowers who cut corners building my house.

But I have no regrets about that throw, because it was amazing. The entire house just shattered into a million pieces in a beautiful cascade of chaos. I was fine, by the way. It was winter so I had my extra thick hooded bathrobe to protect me from the glass. What a thrill! Would do it again sooner if I had the chance.

So there you have it. I threw a "stone" inside my glass house. Big deal. It was just a tiny little mishap, and nothing worth coining a phrase over. How dare you turn me trying to defend myself from a raccoon I thought was inside my house into some kind of moronic metaphor about hypocrisy. It doesn't make sense at all, you jerks.

You clowns need to get over it and stop bringing it up. I have been getting guff about this for years, and I've had enough. I'd like to see you live in a glass house and not throw things at perceived animal invaders.

I learned a lot from living in a glass house, lessons I've applied to my new home. For one thing, I don't live near idiots anymore. More importantly, I've really focusing on living a more basic lifestyle, which is I'm now a dedicated member of the tiny glass house movement.