Schwarzenegger Street, submitted by Craptacular!. During the recall election in California mysteriously accented lefty Arianna Huffington commissioned one of the most stunningly bad political Flash movies in a long line of bad political Flash movies. It was something about Huffington in her hybrid car beating Arnie in his big gas-guzzling Hummer. With a new governor's race in the pipe in California the Flash movies are getting catty and unbelievably retarded once again. This time Democrat Phil Angelides demonstrates what Sesame Street might look like if it were on acid, terrifying and Republican. 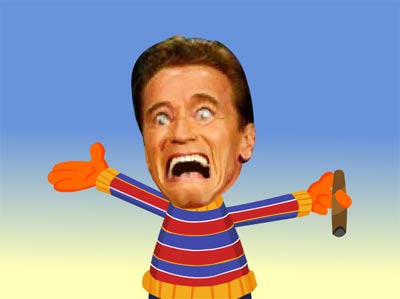 Trust me, it's way worse than that screenshot can capture. Be sure to watch out for the "Cheney Monster."

There is a fine line in politics between having a good sense of humor and being a complete jackoff. I cross it from time to time myself, but Huffington and now Angelides can't even get pizza delivered from Jackoff's Pizza because they're so far out there.