Thursday, Dec 29, 2005 by Reid "Frolixo" Paskiewicz
Know of an awful site? Send it to us and become a hero!

Implosion Group: Dan Winter, submitted by Chilibone. This site goes back to my old theory that if a crazy person puts enough time and energy into his insanity, he will gain support and followers. At first glace you see all this information and graphs and stuff, and say to yourself, “Well look at all this crap, it can’t all be fake can it?” Yes it can, and it usually is. All you need to do is take a closer look into the madness and become extremely frightened that somebody truly believes this stuff. 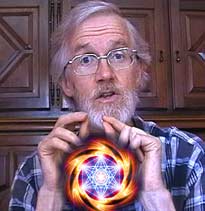 "Implosion Group is proud to present summaries of Dan Winter's essential dynamic- namely that IMPLOSION is the life creating opposite of explosion. Fractal or self-similar biologic capacitors like pine cones, roses, your land, and your EKG during compassion choose Golden Mean (phylotactic) recursive nests. This creates centripedal (implosive) force among waves of charge (spirit/chi/orgone/barrakah/life force). This initiates compression - makes heart - starts sorting/self-organization. Waves in Golden Ratio add and multiply constructively their wave velocities (pic left). Only this wave music which makes self-similarity - (Golden Ratio) - allows compression to turn in to acceleration (Gravity). This explains the voltage called LIFE from gravity which fresh eggs, pine cones, and your HEART make. It also descibes for the first time WHY objects fall to the ground (charge has a way out thru light speed)- explaining for example why capacitors in a pine cone make gravity (eliminating for example the embarassing need to drive around in cars powered by dinosaurs farting). Also documenting for the first time the REASON that GOLDEN MEAN RATIO among brain EEG harmonics identifies BLISS & euphoria clinically. Implosion (bliss-the ultimate A.D.D/ritalin solution) creates suction whose self steering is the difference between being self-directing (for example at death or lucid dream) versus being a parasite (priests for example who say God is outside you.)"

It all makes sense now. Wait no it doesn’t.