A Timeline Of The Penn State Self-Implosion

March 1, 2002 - Jerry Sandusky, a former assistant coach at Penn State University who had previously been accused of child molestation and once promised to stop showering with young boys, is witnessed molesting a young boy in the shower on campus. The witness reports the incident to football coach Joe Paterno. Today Paterno says that the claims of sexual abuse were "vague" and involved "horsing around" so he didn't pay too much attention. Sounds strange, but take a moment to think the situation through from Paterno's perspective. If someone comes to your office to report something even remotely related to molestation, why would you ask for clarification? It's probably best for all involved to simply nod and shrug until the witness leaves. 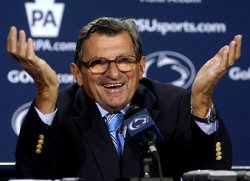 March 3, 2002 - In the worst game of telephone ever, Joe Paterno passes his interpretation of the Sandusky incident to his superior. He does not follow up on the matter or talk to Sandusky about the incident. No authorities are contacted. Sandusky's keys to the university are taken away - even the key to the university jet ski - but he remains a fixture on campus until 2011. In a particularly harsh bit of punishment, he is told that he cannot bring children to the university, which forces him to commit all of his abuse off campus.

November 5, 2011 - Following an incident with another victim, Sandusky is arraigned on 40 criminal counts of horsing around. As details emerge, the story inconveniently makes the national news in the middle of the football program's season.

November 9, 2011 - Hours after proclaiming that he would stay for the remainder of his 46th year as Penn State's head football coach and that the school's board of trustees had better things to do than consider his part in the Sandusky incident, Joe Paterno is fired. The news is almost universally reported in a somber tone that indicates all this sexual abuse is a tragic way for an old man's long career to end.

(This is where things get really stupid, really quick. The following events occur on the afternoon of the 9th, in such quick succession that pinning down a time is nearly impossible.)

- After announcing the decision to fire Joe Paterno, Penn State's board of trustees answers questions from an outraged press room. Examples: "How could you fire an old man?" "Wh-what about our football?" "Haven't you wanted to get rid of him for years, and this was just a convenient excuse?" "Has anyone seen my brain?"

- The news continually refers to the Sandusky/Penn State story as a "sex scandal". That's like calling it a "blunder" when a high diver at the Olympics shits themselves, then intentionally dives off the wrong end of the platform onto the head of a competitor. Don't worry, this inaccuracy goes the other way as well. When someone does anything remotely decent the press calls them a "hero". Especially if they're an American. Then the story can open with a graphic of a cornfield and the U.S. flag, which is always sweet.

- ESPN informs us that some of the victims will "probably" remember their sexual abuse for the rest of their lives. Probably. Some people are good at remembering stuff and some people aren't. This is one of those things that might be important enough to stick around in your head longer than a few hours. Then again, it might not. Fascinating!

- Students begin to gather in protest of the firing of Joe Paterno. For them, it is very important to demonstrate their frustration at authority. The authority that took their football coach away, that is. Not the one that completely failed to make sure a child molestor never had a chance to hurt another kid.

- Joe Paterno emerges from his home to tell everyone how disappointed he is in the board of trustees' decision to fire him. As an afterthought, he urges people to "pray a little" for the victims. How much is a little? About as much attention as you'd pay to someone claiming to have seen a rape. Maybe a bit more. 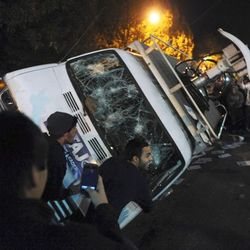 - The gathered idiots at Penn State tip over a news van, then smash out its windows. They do this to defy the media who have treated their beloved football coach with kid gloves - another item Jerry Sandusky has promised to stay away from, though Penn State still allows him access to the kid glove storage room.

- ESPN's Stuart Scott actually asks a reporter on the scene if it seems as though any of the college students in the crowd might have consumed alcohol recently. This is seriously a question that he asks.

- Penn State students attempt to start several fires. When none of them catch, they begin to throw pebbles at street signs, cops, and reporters. All footage from the event features hundreds of dumbasses holding up their cell phones to record videos for YouTube. With this impotent and misguided anger, the students get their message across: If you think Penn State can't possibly have more to be ashamed and embarrassed about, we are here to prove you wrong.

- Penn State's football players consider protesting the firing of Joe Paterno by not showing up at this weekend's game. In other words, they plan to do what they do in all big games, only this time there's a reason.

- As the crowd jumps up and down screaming for the return of their precious football coach and Ashton Kutcher takes a break from filming douchey Nikon commercials to weigh in on Twitter, the board of trustees holds an emergency meeting in which they decide to remove themselves from this terrible reality and relocate to an alternate universe at the earliest opportunity.