McBlare: A Robotic Bagpipe Player, submitted by me. Science has given a lot of great things to the world, like penicillin and Astro Glide. But I think science may have just done irreversible damage to its own reputation with this project. 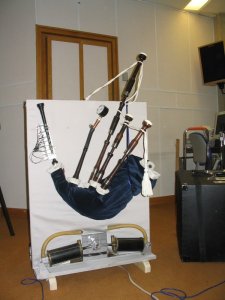 "'McBlare' is a robotic bagpipe player. It plays an ordinary set of bagpipes using an air compressor to provide air and electro-magnetic devices to power the 'fingers' that open and close tone holes that determine the musical pitch. McBlare is controlled by a computer that has many traditional bagpipe tunes in its memory. McBlare can also add authentic sounding ornaments to simple melodies entered through a piano-like keyboard and play the result on the bagpipes."

"McBlare" is an affront to nature. Not because it is dangerous or monstrous or the result of mad scientists playing god, but because it is so completely useless and almost certainly took a substantial amount of time and effort to create. The end result is that "McBlare" doesn't sound any worse than a real bagpiper, but since a real bagpiper sounds suspiciously similar to microphone feedback, and you could hire an entire group for less than half of what this probably cost to make, the attention to detail is less than appreciated.

Fuck you, science. All the money we give you to solve the worlds problems and this is what we get in return?