SmashMyXbox, submitted by me. Alright here's the premise. A web site offers to buy an Xbox 360 on launch day and smash it to bits. Only caveat? You buy it. I imagine a bunch of guys got together and said to themselves, "OH MY GAWD DUDES WE'RE GONNA BLOW EVERYONE'S MIND!!" Okay, it's a clever idea and I admit it's a little intriguing. You'll get a lot of people to watch the video and you'll make a shitload on Google AdSense until Google emails you and threatens to take away the three dollars you made off of their service if you keep writing dirty words on your web site.

The end result of this "social experiment" is a half-assed video that barely lives up to the hype. It's boring. It's poorly edited. The music sucks. The people in it are annoying. Everything about it is just terrible. It's hardly what the web site promised it to be.

Due to success of the SmashMyiPod.com site we decided to take the whole smashing thing a little further, and destroy things right when they come out, in front of 100s of fanboys who would be quite upset to see their beloved game console smashed.

Hundreds of fanboys? There were like six people there. So you impressed a bunch of idiots standing around a Best Buy. Big deal. When the guy took a sledgehammer to the Xbox that dumb fuck could barely lift the thing up. I could think of a lot better ways of destroying an Xbox 360 than taking a sledgehammer to it in front of a bunch of 14 year olds. 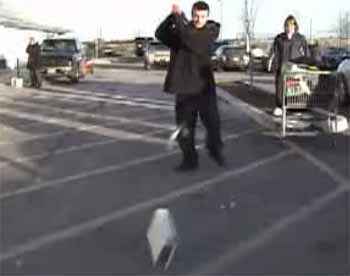 You morons could have blown it up, chucked it into the underside of a lawn mower, or used a catapult to fling it into a brick wall. Put it in a microwave, drop it from an airplane, eat it. Shoot it with a rifle, stick it in your ass, put meat in it and let a rottweiler tear it to shreads to get to the meat. Throw it in a whale's mouth, set it on fire, DO ANYTHING OTHER THAN WHAT YOU ULTIMATELY DID.

Sure, they might get a little bit of traffic for their site as a result of being the awful link of the day on this prestigious web site what with these Internet links and all. They might even make a couple bucks in the process. But they'll have to go to sleep every night knowing that they blew their one chance to create a truly exciting video of an Xbox 360 being destroyed in the most creative way possible and betrayed the trust of their naive donors in the process. You people should be ashamed of yourselves.

The funniest thing about this is that this is the "rough draft". What are they doing to do, release a special edition with new scenes and CGI Dewbacks in the background? How can it get any better than this masterpiece? Hey, I'm not surprised these guys are from Canada. Yeah that's right Canada, YOU FUCKED IT UP AGAIN.

Anybody can solicit money on the Internet to buy something and record themselves destroying it. But it takes a real man to do it well.