Jonathon for Governor, submitted by kc0bbq. Jonathon Sharkey is running to be governor of Minnesota and he has his eyes on being the President of the United States. Why should you care? Because his stated name on his campaign site is actually Jonathon "The Impaler" Sharkey and he describes himself as "vampyre." 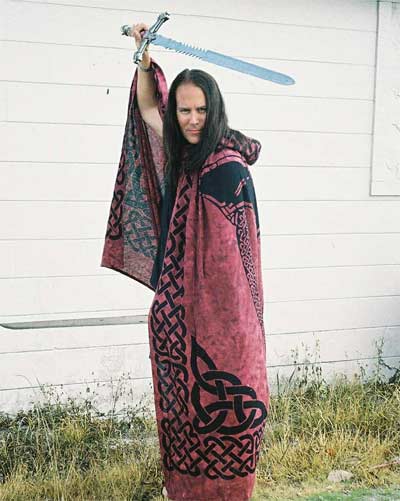 Honesty is very seldom heard nowadays, especially from a politician. So, I am going to break from political tradition. My name is Jonathon “The Impaler” Sharkey, Ph.D., L.D.D.D. I am a Satanic Dark Priest, Sanguinarian Vampyre and a Hecate Witch. My Magikal Path name is: Lord Ares.

I despise and hate the Christian God the Father. He is my enemy.

I would expect this sort of site from a half-serious teenage goth, but this guy looks to be middle-aged, dresses in suits and has a PhD. That doesn't mean that he isn't hilarious, just that this seems to be a serious attempt to run for office. I say: good for him. In fact, I think having a vampyre and witch as the President would possibly be the coolest thing ever. He's definitely from outside the beltway unless we're talking about some sort of druidic healing gusset and I think a bloodthirsty majik-wielding creature of the night is just the sort of thing we need to shake up America's stagnant corporate-run oligarchy.

Can you imagine how entertaining this guy's State of the Union Addresses would be? There would be flocks of bats circling around the candle-light interior of the Capitol and chanting monks in black and red robes would flank him on either side. All of his cabinet would be hot latex fetish chicks with fake fangs and vinyl lingerie. It would be worth risking the ruin of our country for four years just to see how the fuck CNN would cover him. I can imagine Wolf Blitzer stammering in the situation room as some eyebrowless high priest of a PR rep talks about blood rituals.

Maybe Republicans would realize letting people have gay marriages and teach evolution isn't so bad and Democrats will realize that handguns and lower taxes aren't such a terrible thing if The Impaler is putting the heads of executed criminals on pikes outside the White House. And of course the American people win all around because we'll have a lot of laughs, plenty of great memories and the Impaler can't care any less about us than any of these other idiots. Vote Jonathon "The Impaler" Sharkey for governor and President!