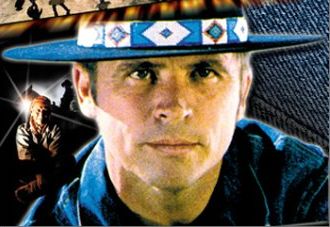 The Official Billy Jack Website, submitted by Fistgrrl. Who is Billy Jack? Well, he's a character from an early 70s action movie and, according to Wikipedia, Billy Jack is "a Native American Green Beret Vietnam War veteran, hapkido master, and gunslinger". So basically if you add mutant and cyborg to that he is every action movie hero wrapped into one. There have been four Billy Jack movies total, one of which was never actually released, and a fifth film which will supposedly be released in 2007.

You may have detected a hint of doubt in that last sentence. It looked a lot like the word "supposedly" and, in fact, was that word. The reason I doubt the new Billy Jack movie's chances can be best summed up by the absolutely insane and rambling official website:

perhaps the most unusual Feature Film yet made.

Imagine Billy Jack in a heated debate with the real George Bush over whether or not Bush lied about invading Iraq.