Monday, Jan 29, 2001 by Rich "Lowtax" Kyanka (@TwitterHasBannedAllMyAccountsEver)
Know of an awful site? Send it to us and become a hero!

The Republic Gaming Console, submitted by Mako. You console clown fanboys have been bickering over the PS2 / Gamecube / X-Box debate for months now, but you seemed to have forgotten a major contender who will turn the entire console gaming scene upside-down. That's right, I'm referring to the "Republic Console", the brainchild of a few illiterate Texas rejects who have an idea, a dream, and a goal, but not a shred of intelligence.

What is Republic? it about a New system going to come out with better Engine faster loading and better features Hi i Love videogame and if you wont to join my website and become a member of Republic then e-mail me and tell me what you can do and there are other website of the Republic that talk about the game and new handheld coming thank you for your time to check my website.

What Inside are System? We are going to tell you the part inside in out Republic with better graphic then the PS2,the DC,and Gamecube We dont have picture but they will be there Voodoo 5500 it a Video Card ModemUSR 56K v.90 celluar OCZ-value 128megs With 128 bits and enhanced graphic it called the OCZ PC 133 and it enhanced memory to (150 to 222)

Preview - Check out are cool game for the Republic it will tell you about the game and we will have picture for them at are picture page so check it out. Tell you what is it about and a preview of this game Flare Flare is a man that has power of fire he is a man but when he get angry he turn to flame and destroy his enemy Doom. Him and his brother Jolt are ready to destroy his villians and him. So get ready for this game because it is going to be awesome. 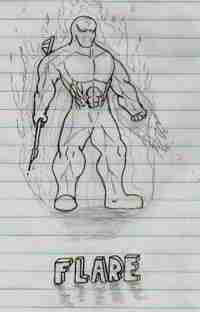 I personally can't wait until the Republic Gaming Console is released. I mean, with features like a Voodoo 5500 ("it a Video Card") and 128 megs of "OCZ-value With 128 bits and enhanced graphic it called the OCZ PC 133 and it enhanced memory to (150 to 222)", you know Nintendo and Sony are going to be quaking in their boots! Bring on the Republic Gaming Console! I want Flare! I want Flare! Power to the people! Free Jeff K.!

PS: There's a link to a guestbook you can sign on the Republic Gamers Webpage, undoubtedly to ask any questions you may have about this up and coming console contender.