Sunday, Mar 04, 2001 by Rich "Lowtax" Kyanka (@TwitterHasBannedAllMyAccountsEver)
Know of an awful site? Send it to us and become a hero!

RON'S KISS ARMY PAGE, submitted by Rimmer. A rabid and insane Kiss fan who was apparently blinded by one of Gene Simmon's shiny outfits has constructed a page dedicated to his favorite band. Judging by the site's design, Kiss has a very strong stance against the use of good HTML. 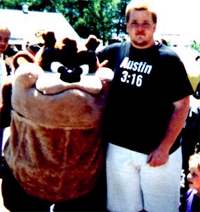 After my failed attempt at college I then without much success went to venture on the job circuit although i have had lets see 2 jobs since I dropped out of college one of them which I still technically have but I am on call basically. I still make an attempt to write and make my own music, it's not good but for someone who's never had a guitar lesson in his life I do pretty good. I am in a band in Chatham Ontario Canada called Whispers Of Chaos, and there is actually a full band there too finally a whole band. Our next practice will be when I move there in march and finally have full fleged practices. I am also involved with a role playing e-mail wrestling fed called UCF, it is very very cool each wrestler is out to make the other a better role player and make it fun for everyone and not have to worry about childish bullshit like other efeds I've been in. I have been in that fed for about i'd say ohhh september of 1999 and I have changed royally about how I am there and I've gotten a lot better, maybe not repsected but better. My favorite bands are as follows KISS,METALLICA,VENOM,QUEEN,MOTLEY CRUE,MOTORHEAD,DIAMOND HEAD,MORBID ANGEL,DEICIDE,MARDUK,CRADLE OF FILTH,MARILYN MANSON,LED ZEPPELIN,TYPE O NEGATIVE,NIRVANA,SANTANA and shitloads of others I didn't wanna bore you too much with this bio.

Too late there, chumpchange. If it wasn't for the searing colors smeared across your page like a radioactive facial, I would be in a deep coma by now. Check out this gem from his "FRIENDS SECTION" page:

This is a picture of my friend Faget_Girly, I haven't seen her online in ages but I miss her very much we were pretty good friends and it's a shame to me that she had to leave so therefore I told myself I'd never take her pic off this page.

What's so funny about that? Simple: HER PICTURE IS A BROKEN IMAGE LINK. I guess her photo doesn't want anything to do with him either. Make sure to check out his "THIS IS THE KISSTORY YOU WANTED TO SEE" section which is written in bright red all caps. Do people not look at their sites after they code them?

PS: There's a "KISSBOOK" you can sign. I assume this would be the place where you copy and paste your lawsuits against Ron, seeking compensation for loss of eyesight.