Capistrano Island Command, submitted by Chris. Okay so I'm looking at this moron's Internet and I'm thinking about how much I'd like to stick my fist into the computer television screen and just grab this squidfuck's neck and throttle him around until something shakes loose in his huge balloon-sized head, but I don't know how to do that so if somebody knows then send me a mail message and tell me how right now. On second thought, don't fucking bother because I won't read it and you'll just be wasting time that you could instead be using to save your hard disks to floppy drive or whatever you Internet nerds do. Anyway this pusbag has a bunch of dolls that he puts in what he THINKS is war positions but he doesn't know jack shit about war positions because he never served in three world wars like I have, and until he does he'd better take his dolls and go play with the other girls in Tinker Toy School of Fruitfucks. 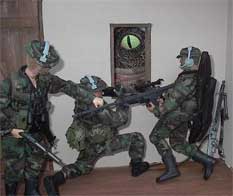 Well that picture is kind of accurate, I was in the Battle of Tam Quan during World War I and we were holed up in this grass hut and the goddamn Charlies let out these dinosaurs out and they started eating everything and running around and starting fires and I ain't never seen such a thing before and I hope to God I never have to again because those were the worst 5 minutes of my life and I would probably be dead if I didn't throw those fragmentation grenades into the medical chopper with all the kids inside because those kids sold our unit out to the Japs and they'd just grow up to be like the Japs anyways. Or the dinosaurs. I don't remember what I was writing about here but I hate this site and I hate dolls and I hate dinosaurs and Japs and choppers and bike wheels and tuna and you and most importantly you. I wrote "you" twice for emphasis because thats what us writers do, it's called "writing" look it up in a wordbook you quarter-wit dullards.