Stevie, I've never been so consistently dazzled by displays of reading comprehension. You have matured to such an extent that I might soon rechristen you Steven, in honor of your adulthood. But this is not yet your name. You have learned so much about how to be a hero when you go Outside, and also what avoidable behaviors carry the punishment of death justice, but your lessons must continue. Please provide us with your report.

Thank you, Instructor. If you will please allow a flattery, this latest book task "Superman in The Phantom Zone Connection" makes me so thankful for all you and the others have done to keep us safe, scientifically. 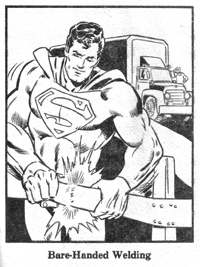 Superman is making heat vision come out of his love parts. He was fixing a highway railing for the truck driver, and he decided to try something new, because he gets bored with his powers. He's pleased to learn he can do this trick. He can write his name in molten metal with no hands, and he can create a lava stream during passion times. These might not seem like necessary abilities, but Superman gets in some strange situations. 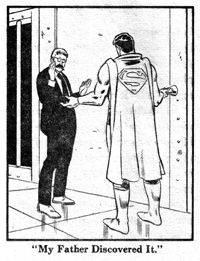 Superman shows his new talent to a dandy. We learn that his dad first discovered this gift. The dandy looks like he's going to faint and say "Oh, my!" His eyes have rolled back into his skull, so you can't see the color-balls through his glasses. He has never seen anything this shocking, even though he hangs out in jails a lot, like he's doing here. 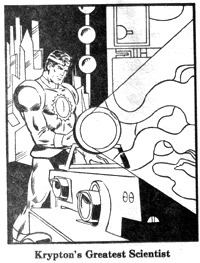 This looks like Superman, but instead of an "S" on his chest, he has a picture of the sun. Sunman makes the same glow that Superman just learned, but much more impressively, because he has a special science understanding of solar energies. Sunman's awesome ray contains the baby-making pollywogs, because it turns out that's the purpose of this skill. It's not just for showing off to dandies. People from Krypton can't have love way with Earth humans, because the babies come out horribly charred. 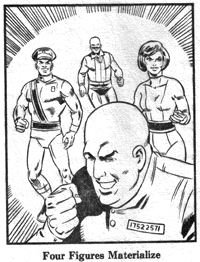 Sunman has made four babies. On Krypton, children are born as adults, because it is dangerous for people with super powers to be infants who don't know how to use them. They would want to try to crawl, and to put things in their mouth, and to throw a fit, and by doing these things they could destroy their cribs, and their houses, and their planets. There are no Facilities there, or else they could learn these lessons in good time. 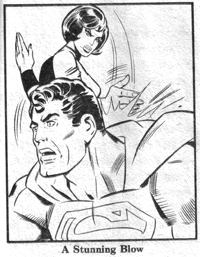 Sunman's daughter gives Superman the karate hand. This is because she has a baby brain. She thinks he is her father, because they look similar, and she is too young to know the difference between an "S" and a sun picture. She hates her father, because she thinks he abandoned her for years and made her forget all her memories, when she's actually only minutes old. She looks like a heroine, or a gymnast, or a reptile. Superman is confused and sorrowful. He wonders, "What have I done to be the recipient of such pain?"