Have you ever wondered who paints the sloppy, shoddily executed scenes on carnival rides? Neither have I, but just work with me here. Bieling's is a nightmare of a site vomited up by the Bielings (Peter, Karen, and their son who is also named Peter), a family of artists who use "classic design, painting, pottery and sculpture techniques to produce artwork in public and private venues." You'll notice "web design" is absent from that list. There are broken links all over the place, and the overuse of Flash makes navigation actively hostile.

The elder Peter's section of the site forces you to sit through an obnoxious animation of paint being squeezed out of a poorly drawn paint tube onto a poorly drawn palette. I don't mean to nitpick, but how are different colors coming out of the same paint tube? This just makes me wonder if Peter knows anything about paint.

If you click through Peter's portfolio, you'll see he's made quite a lot of art for amusement parks and "storfronts" in the New Jersey area over the years. His paintings look like the kind of stuff you might find in one of those zany 1950s-retro restaurants with tacky knickknacks on the walls. Of course, it's hard to comment on the actual quality of the artwork, because every image on this site is old, blurry, and super-compressed. In fact, you might say the jpegs have more artifacts than the Smithsonian, ha ha ha ha.

The section called "New Roc City" takes viewers on a strange, stuttery journey. Judging by the final image after the herky-jerky slide show comes to a stop, the Bieling Boys decorated a hockey rink with a lovely mural of a Canadian goalie standing in front of a U.S. flag. There's also some text narration, written in the voice of an excited first grader:

this is what we saw when we first got there?

Then we arrived in the room we were going to paint a mural!! A Hockey Rink!

So we started to work!

Most of Bieling's artwork is bland and inoffensive, until you get to "Jerry's Van," the back of which features an oddly proportioned naked dude (possibly Jerry?) with a bunch of rats. Imagine being the poor soul who gets stuck behind this grotesque menagerie in a traffic jam. 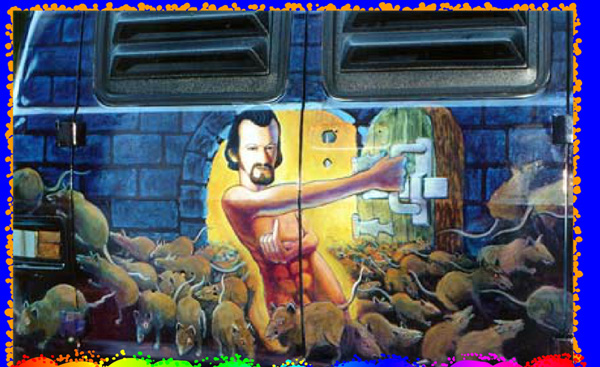