(WARNING before you click: obnoxious autoplay music!) Sneables are "hilarious cartoon characters with attitudes," or, more accurately, horrible clip art nachos with generic faces that look like they were made by a preteen. Somehow, there are 34 of these godforsaken creatures, each boasting a unique identity. Take Frank Fearless, for example. You can tell he's the cool one because he's wearing poorly drawn shades. Some of the Sneables are supposed to represent emotions, like a cheap Mr. Happy ripoff, while others are essentially the same guy or girl but with different sport equipment or hair color.

Now, you might be surprised to learn you can get Sneables on T-shirts, hats, and 60+ other Cafepress-quality products. Buh?!? Cartoon characters on merchandise??? You'll soon learn to expect out-of-the-box ideas like that from Sneables creator Michael Pellegrino, who started this "journey" many moons ago and has been riding the gravy train ever since. Although Michael says he's the creator of Sneables, they were actually designed by another guy, as was the rinky-dink website, so really it's unclear what Michael contributed to the project other than thinking up new things to slap Sneables on. 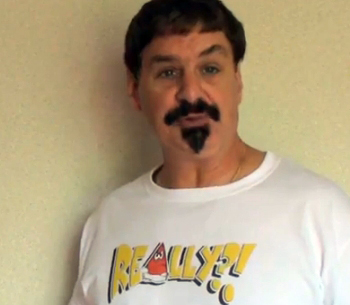 In this amazing video, Michael - whose facial hair kinda makes him look like a schlubby Guy Fawkes - declares "Sneablemania is running wild!!!" He supports his bold claim with unenthusiastic testimonials from local business owners, starting his victory tour at the fateful restaurant where "one catchphrase jump-started a whole ideer for Sneables.com!" He never says what the catchphrase is, but context suggests it's "Whadda Ya Mean We're Outta Beer?", given that the camera clumsily cuts to a mug on which an agitated green Trivial Pursuit wedge of a Sneable named "Jeremy Jolton" poses that question.

Other mildly sassy Sneable quips include "It's about time you got here," "NO CAN DO," "Here We Go Again." These aren't even jokes, they're just insipid things that dullards say. But dullards buy merch too! And Sneables are like Big Dog shirts without the aggression, or a less cerebral Ziggy cartoon. Expect success when Michael inevitably takes his modern American success story to Kickstarter!