Ah, craft beer and Japanese animation: two refined art forms reserved only for the classiest of gentlemen. And yet, nobody had the foresight to combine the two until Brewerianimelogs came along!

I used to take pictures of beers and did small reviews here and there for my friends, trying to introduce something they had never seen or something they would like to try. One time I had grabbed a picture with an anime picture in the background from my Television set. I had looked at the picture and stopped. Listening to my father's "Recuerdos, Mexican Oldies" Something hit me. Something hit me to take my favorite hobbies which is anime and video games and pair them together. [...] On that faithful day on the 17th of October 2012, I added my first post.

Brewerianimelogs is more than a hobby for Jorge... it's his dream of a better tomorrow:

I have a very strong passion for this idea which may one day bring people that love beer and anime together.

With this noble goal in mind, Jorge has dedicated himself to showing the world how assorted craft beers "pair" with pictures of busty anime babes. His write-ups are just as goofy and depressing as you'd think. I see you're ogling sexy fanart of an anthropomorphic rat-lady. Might I recommend a vintage 2009 Birra Arigianale Draco Italian Belgian strong dark ale to go with it?

Some pairings are a bit on the nose, like Asuka and Rei from Neon Genesis Evangelion for Double Jack IPA (because there's two of them, you see?). But Jorge put serious thought into other selections, judging by this illuminating explanation of his anime pairing for Smooth Criminal English Barley Wine:

Vocaloid, Haku Yowane, was chosen for this pairing to represent the aspect of "Michael Jackson" and Smooth Criminal. Haku for the aspect of the beer and MJ, co-inside with themes of music since she is a musician but her name means utter bad thoughts. A pun to, "Who's Bad?" In terms of the label, I did not get the colors right, but the flavors of the beer such as the dark fruit, cherry and plums are there in in her clothing colors and evil eyes. Her white hair represents the addition of the Saison Lente (A white blond beer) that was added to Anniversary (Evil thoughts of Haku influencing the pure beer) and then creating this, Smooth Criminal. I'm just glad I found a great picture to pair with this beer and tribute to MJ's "Smooth Criminal". 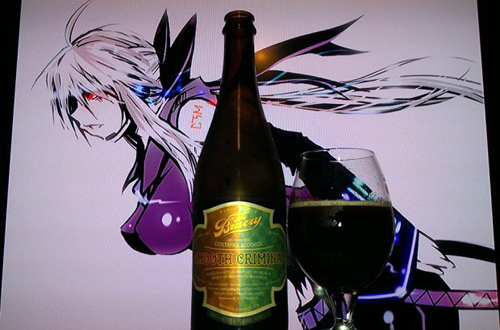 In less than two years, Jorge has already amassed nearly a thousand pictures of fancy brews posed in front of anime babes, including Jenny from My Life As A Teenage Robot. It's enough to fry your brain!