When you've sunk thousands of dollars into collecting posable life-sized adult dolls, you can't let that kind of investment remain your private little shame. No, you've gotta dress 'em up and show 'em off to the world! At IncrediDoll, you can bear witness to the incredible world of dolls. Viewer discretion advised, these ain't your daughter's dolls!! (The "I AM NOT OVER 18" button assumes you'll "be back later," once you're mature enough not to be scarred for life by exposure to severe adult loneliness.)

IncrediDoll's proprietor, who goes by "Incred," has seven RealDolls in his harem: Ceilidh, Jayde, Yuri (who can swap faces and become "Yoshi"), Tira Misu, Dottie (who "lives" with the other dolls but is owned by someone else), Myfanwy, and Vicki. He likes taking pictures of them. Lots and lots of pictures.

Naturally, you might think these inanimate objects would be incapable of engaging in most human activities. Wrong! They can can hike, bike, cosplay, and perform surgery. They can even mourn: 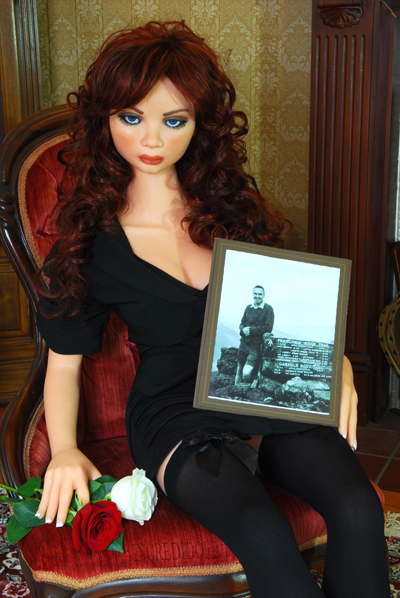 After the funeral I took some pictures of Myfanwy with a couple of roses from the service, and dad's picture from the cover of the program. While I was at it I took some more with Myffy crossing her legs. I just couldn't help myself

Of the shoots I did do the first is Jayde. Her birthday November 26, 2007, and for a present I replaced her labia :P I put together a few pictures on how I replaced it. The only pictures I didn't get was showing how I added a little colored two part silicone inside and out. When replacing the labia sometimes the new one doesn't quite fit or fill the space so added some two part to smooth in the gaps.

With the disposable income that's somehow left over after his budgeted expenses for dolls, outfits, and "operations" (repairs), Incred criss-crosses the country for various doll meets and conventions, where he and his fellow doll-lovers pose their dolls together. Sometimes, they connect with doll manufacturers and have a "hands on experience" with unassembled new doll models. That's not a double entendre or anything: They literally touch doll boobs to ensure they meet their exacting standards.

Here's a gallery of Incred running his tests on a disembodied breast (not sure what the water bottle is supposed to prove), with each photograph clinically staged like it's an alien autopsy or something. Incred placed gigantic watermarks on all these images to prevent cyberscoundrels from stealing them, as if anyone else would possibly want credit.