The Kitsune Society (Thanks, Gnap!)

When you were a kid, did you ever form little clubs with your friends, and even make up your own coded language to confuse grown-ups? The Kitsune Society is like that, only somehow much dorkier.

The Society is a fledgling counter-cultural organization that's currently 40 members strong. Its founder, a DeviantArt weirdo known as ZS3, considers it a potentially crucial force in the rebellion against "trash culture," which he vaguely defines as reality TV shows, except the ones that are "actually good," like Beauty and the Geek. To attract new members, the group created a Google Sites page that looks like a parked domain placeholder. Everyone knows millennials can't resist giant stock images of grass. 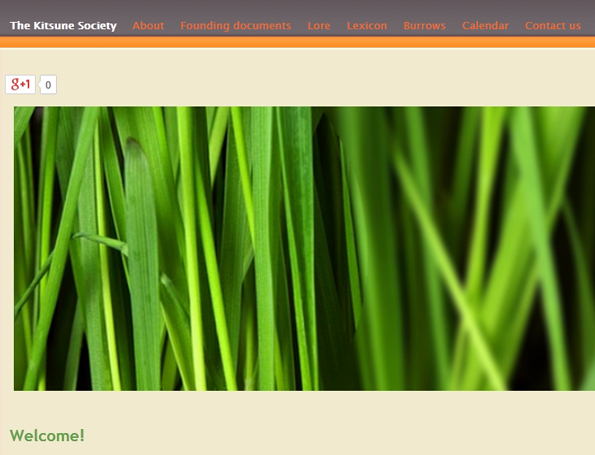 Like all great clubs, the Kitsune Society boasts an organizational structure that's needlessly complex and labyrinthine. Members are divided into regional "burrows" with stupid names like "the Vulpine Vanguard," and they're assigned different ranks such as Yako (middle-tier) and Taimaza (headmaster). If you're wondering how deep this fox hole goes, their Constitution actually specifies the procedure for blood oaths... you know, just in case:

Article XXXV: Hemozori or blood oath. In the unlikely event that an oath is of such importance as to be absolutely inviolable, a blood oath may be made by all parties to the oath. Each party to the oath shall prick his thumb such that no serious injury occurs but sufficient blood may be drawn, and the affected thumb shall be pressed to the bottom of the document. Each party shall then wash his thumb and treat the wound if necessary. The blood oath shall be reserved for the most drastic of instances so that any breach thereof shall allow the use of the bloody fingerprints for the sake of prosecution by the Master of the Burrow if only one Burrow is involved or the Headmaster if more than one Burrow is involved.

The group's "core teachings and values" are laid out in ZS3's "Kami Sutra," which he describes as "a seamless hybrid of revolutionary thought and spirituality" that he earnestly hopes will become the bible of the Occupy Wall Street crowd. It's filled with inspirational musings like "Normality is for the weak." Wow, who knew Hot Topic T-shirts could be so deep and spiritual!

ZS3 also lists "The Ninety-Nine Debasements" that can "prevent a person from becoming Homo Superior." There's a lot of overlap with The 108 Defilements of Buddhism, but the Kitsune version includes "Noobishness" and "Ass-hattedness," which I guess Buddha forgot to mention. You should also avoid Hot Pockets, which are considered haram. Sorry.

To combat charges of cultural appropriation, the Society created its own language known as "Kitspeak," based on appropriated Japanese words and dopey pop culture references. Some choice entries:

Intrigued? To join the Society, you simply fill out an application that requires your social security number, an emergency contact, three references, and multiple essay questions ("Describe what you know about Japanese religion, spirituality and mythology."). May the Kami look upon you kindly.