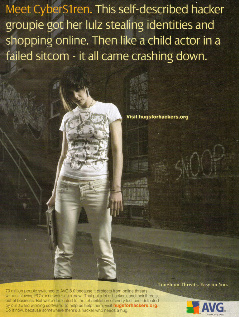 Most of you have probably seen the above advertisement in Game Informer, Spin or other magazines. It's an example of how even ads from computer-oriented companies can be pathetically out of touch, largely because they're written by marketing doofs rather than programmers. The contemptible use of "lulz," the hackneyed child actor analogy -- the text strains so hard it should be framed in stretch marks. Also, given that "CyberS1ren" actively engages in hacking, she's not exactly a "hacker groupie," in much the same way that Hackers star Angelina Jolie isn't an "actor groupie" just because she's fucking Brad Pitt. But these are relatively minor offenses. The real lameness begins with a visit to hugsforhackers.org, the Web address lurking above the cheesy "Snoop" graffiti.

And finally, back on Hugs for Hackers, no inept net-culture farce would be complete without a Lolcats joke. 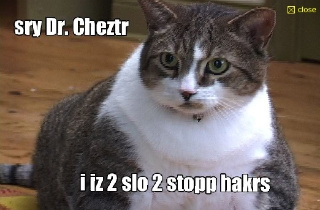