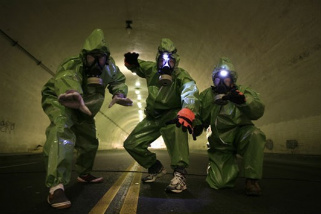 The secret of the ooze.With a few weeks remaining until the July 15 premiere date, it's getting less and less likely that Hurl! is just an elaborate ruse. G4 unveiled the reality show on April 29, revealing that five contestants will gorge themselves on pot pie, Ambrosia salad and other menu items that lead to easy, colorful regurgitation. Once stuffed, they'll have their stomachs tested by a series of disorienting devices. Those who don't immediately upchuck will return to the buffet, then go for another ride on the equilibrium-jostling pendulums. The network predicted "you will be laying down friendly bets over a few beers with your peer group while watching men of a similar age and background spew on national television." G4's message-board posters unanimously disputed this prophecy.

Hurl! combines the chain-reaction dynamics of Stand by Me's Barf-O-Rama with the dated euphemistic terminology of Wayne's World, without the comic charm of either. The show's Web site, which attributes its concept to "the outrageousness found on the viral web" instead of actual vomit-inducing viruses, contains no splatter shots, but it still sets the stage for television's impending nadir. When confronted with the news of this program's approaching existence, Lowtax said the America of Idiocracy arrived about 500 years earlier than expected. (Which is true, but I'd much rather watch Ow! My Balls.) Hurl! contestants risk gastrointestinal distress and public filthiness for the chance at a measly $1,000, but they're still better paid than viewers/browsers, who endure physical revulsion and profound societal disillusionment without compensation.