Okay, take a look at this picture and try to give me a good reason why I, the blue guy on the left, can't follow that red haired asshole up the ladder. Do these rules make any sense? I just want to climb the ladder and do my job, that's all.

It's "that time of the month" again, and I'm not referring to the few days when little Mrs. Blue Guy #762,182 starts getting cranky and begins discharging liquids from her naughty holes which clearly aren't blue. I'm just kidding honey, please don't be mad. I've been notified that the Video Game Henchmen's 563rd Union Address is due today, and as your union representative it's my job to get this thing together so management can at least pretend to act like they give a shit about us employees getting murdered by the millions every day. Some of you out there might think I'm a naive fool for continuing this crusade, but I feel that these updates will eventually make a difference and maybe, just maybe, I'll see the day when I don't have to spend every waking minute filling out paperwork for all the 563rd Union members who are shot to death every hour. I can keep dreaming, can't I?

Before I get into today's update, I'd like to post some obituaries for a couple of the more prominent members of the Video Game Henchmen's 563rd Union who recently (less than three minutes ago) died in the line of combat:

Guy Wearing Goggles Who Shoots a Stationary Cannon Straight Forward Nonstop #70,237. I'll always remember Guy Wearing Goggles Who Shoots a Stationary Cannon Straight Forward Nonstop #70,237 as the life of the party. You fellow members undoubtedly recall the time he showed up at the Video Game Henchman 563rd Union Christmas party last year and used his stationary cannon to launch tube socks full of jellybeans at the kids. Of course nobody was able to catch any of them as they flew in a perfectly straight horizontal line for a seemingly infinite distance until ultimately hitting a wall in another country somewhere, but he was still the hit of the party. This brave man was killed when PLAYER 1 shot one of those metal barrels which explode for no good reason at all. I'm sure you guys can remember my endless crusade to get these stupid barrels removed from the heavy foot traffic areas. I don't know what happened to that petition, but I assume management put it in the same place they stored my petition to stop leaving ammunition and heavy weaponry lying around on the floor for PLAYER 1 to freely pick up by running over it. 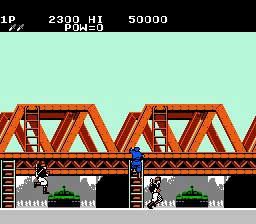 Look at all these ladders that we can't use, instead forced to run in random directions below and jump like hyperactive idiots. Why are there even ladders on the second level anyway? Oh, and that's not me in the blue outfit there, that's the infernal PLAYER 1, damn his eyes!

The big issue at this week's union meeting was ladders, more specifically, management's idiotic rule prohibiting us from climbing them. As you're all aware, management first established the "no climbing ladders" rule back in the mid 80s, before our union was formed, to address the problem of henchmen climbing up and taking smoke breaks on the upper floors. We all know about the infamous Red Guy #13,284 who climbed up to the third platform and started puffing on his "wacky tobaccy," thus allowing the evil PLAYER 1 to slip by undetected beneath him and get into Orbital Boss Headquarters Zone where he destroyed Mr. X's mainframe supercomputer which was scheduled to blow up the universe mere minutes later. Now some of you might claim that even if Red Guy #13,284 was on the bottom level and had a chance to stop PLAYER 1's rampage of terror that it wouldn't have done any good anyway, especially considering the fact that PLAYER 1 had previously killed over 5,000 other henchmen less than 30 minutes before arriving there, but that's inconsequential at this point. I'm just here to deal with the facts, and it's irrefutably true that management's strict "no climbing ladders" rule is hindering our performance to stop PLAYER 1 and, to a lesser extent, PLAYER 2 as well. Let's look at a few facts here:

1) By prohibiting us from going up and down ladders, management is effectively diminishing our combat performance. Fellow video game henchmen, how many times have you been firing your ineffective weapon at PLAYER 1 when suddenly he climbs up a ladder to a platform above you, rendering you completely powerless and unable to do anything except run back and forth like a retarded dog underneath his location? Hell, this has happened to me seven times today, and I just started counting 20 minutes ago. I was stationed inside Dirty Concrete Warehouse Zone next to Guy Who Walks Really Slow But Carries a Really Powerful Gun #958,277 and Ineffective Robot #29,943. Management sent me a memo saying that PLAYER 1 was spotted heading for our oil dump, and despite the fact that I've never seen a single vehicle actually use this oil, I was told that it's very valuable and important and a few hundred thousand of us were needed to run back and forth in the warehouse near it. I got a wife and three kids, so I'm really not in any position to say "no," so I put on my blue pants and blue shirt and headed out.

They dumped me in there, I met up with Guy Who Walks Really Slow But Carries a Really Powerful Gun #958,277, and we began talking about why he walks so slow and if I gave him a smaller gun which weighed less, would he walk a bit faster. Suddenly PLAYER 1 comes rushing in, shooting everything all to hell and back, so we start firing back at him. Well Guy Who Walks Really Slow But Carries a Really Powerful Gun #958,277 gets hit in the legs by whatever god awful powerful gun PLAYER 1 had at the time (I think it was one of those which shot the nuclear fireballs that explode upon impact), so I follow standard company protocol and continue to fire at PLAYER 1 without acting like anything happened or changing my battle strategy at all. Before Guy Who Walks Really Slow But Carries a Really Powerful Gun #958,277 even has a chance to flash rapidly and disappear, PLAYER 1 climbs up this ladder and continues heading in the direction of the oil dump! I was forced to run back and forth for a good six hours below the ladder, hoping that he would eventually climb back down the ladder and fight like a man, but then I got a fax from management explaining that PLAYER 1 had shot their giant boss robot in his eye (the only vulnerable spot on its entire body) 50 times, and our organization had been successfully defeated... again. I told those asshole engineers that they should just put a piece of goddamn titanium over the robot's eye, but does anybody listen to me? Nooooo, of course not. Hell, fuck the titanium eye-cover, if they just put a goddamn metal door somewhere that was locked and impossible to blow up, there would be no way for that idiot PLAYER 1 to get in. How much would a metal door and a lock cost anyway? Less than a damn giant robot, let me tell you that much.

In this photo I was lucky enough to be strategically positioned on the top floor, but I wasn't able to climb the ladder down a level. WHY?!?

My point here is that these fatcats up on the secret moon base have all these stupid rules and regulations that they dump on us, and they are so out of touch with reality that they don't know how adversely it affects our combat performance. We need to be able to use these ladders if they expect us to hit PLAYER 1 with our guns more than once every 600,000 tries. We're at enough disadvantages here already; we don't need this stupid beaurocratic red tape hindering our job performance even further. One time PLAYER 1 jumped up to a level above me and there was a ladder right there, yet thanks to the stupid rules and regulations, I wasn't allowed to climb up it, instead having to settle for shooting straight up and hoping PLAYER 1 would voluntarily climb down the ladder and intercept some of my bullets with his body. Needless to say, it didn't happen, and here I am now, getting drunk and trying to forget the faces of my countless brothers who were gunned down by the merciless PLAYER 1.

2) There are ladders inexplicably all over the goddamn place. Yes, I'm aware that management saves a shitload of money by simply dumping ladders everywhere and refusing to build staircases, but I've been talking to a bunch of people and we've come to the conclusion that the money saved by using so many ladders is outweighed by the money wasted on giant wasteful robots that shoot out lasers and missiles from every orifice in their body. Why are we allowed to run up and down staircases yet can't do shit with ladders? I mean, they both go between floors and they both serve the same functional purpose, yet we're still expected to abide by that stupid arbitrary rule made back in 1986. Things were vastly different in the 80s; ladders were weak and unreliable, often made up of three elongated, primary colored, two-dimensional rectangular bars which lacked any kind of true structural engineering support. These days we've got 3D ladders which even have their own shadows, so if safety is a concern (which I know it isn't), then this technology should prove to be much more reliable.

Anyway, back to the original point: there are ladders everywhere. I don't know who the hell designs these stupid space stations and buildings we're always forced to patrol, but they obviously didn't construct them expecting anybody to actually use them. I guess I can understand why they installed a series of random floating metal platforms which cross over a giant pit that has the ability to instantly murder anything falling into it, but why did they make they only accessible via ladder? How the hell are people like me supposed to get up there and chase PLAYER 1? Does management even give a damn?

As you can see, it's another month and another series of uphill battles for us here in the Video Game Henchmen's 563rd Union. I'm going to keep doing my best here and trying to level the playing field for us, maybe one day allowing us the ability to pick up guns and various other weapons we find laying on the ground. A guy can dream, can't he?

I suggest you go and read it immediately. Please, think of the children!