Deeker, a 38-year-old "adult kid," runs a terrifyingly thorough site that contains all the information any sane person could want (plus much, much more) about "boys of all ages (up to 17) who wear diapers for any reason." Because of the angry-mob-attack risks inherent in such a pursuit, he prefaces his home page with an elaborate disclaimer explaining the pure intentions behind his infantalism, though his guileless advocacy for having children visit the site ("Kids, especially boys, love anything that has to do with stinky, poopy butts, so who is to say they should be forbidden from taking it to the next level and adding diapers to the mix?") probably only enhances his status as a firebomb target. Technically, I guess, this isn't gay pedo scat porn, but if the diaper fits, pin it on.

Once computer users have made the regrettable decision to enter Deeker's Diaper Page, they can perform penance by torturing themselves with his horribly written, unconscionably long stories, which would qualify as malicious literary atrocities even if they weren't about little boys' (occasionally eroticized) pooping misadventures. He's also amassed thousands of crudely rendered drawings of cherubic lads wrapped in shit-bloated plastic, images that are ostenstibly non-sexual in presentation yet still completely fucking disturbing.

There's also a "public sightings" section populated largely by thirtysomething males meticulously describing every detail of the time they witnessed an 8-year-old wetting his Huggies. Estimate how profoundly creepy this sounds, then picture the next grossest thing you've ever seen or imagined, then multiply them into some exponential amalgamation of depravity, and you'll have an idea of what it feels like to spend five minutes on this site. (The fact that there's, like, 50 zipped files for every individual file you open will leave you with the same evil-exists-and-there's-nothing-I-can-do-about-it desperation Tommy Lee Jones experienced in No Country for Old Men.) After absorbing any of this, you'll likely be prompted to fill out a pseudo-scientific survey filled with the type of probing queries that make a lot more sense when attached to a hospital clipboard rather than an office-supply clerk's fetish playground. 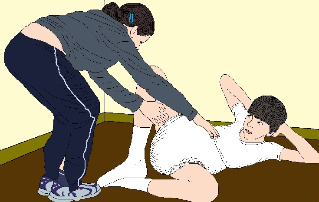