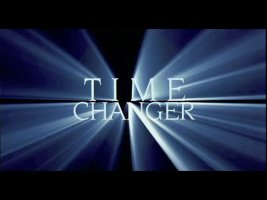 Overview: A dork from the 1890s travels through time to the present in order to scold everyone he sees about why they should love Jesus more.

The Case For: Bizarrely high production values for a Christian film.

The Case Against: If I wanted someone to drone on and on about why Jesus is the center of the universe, I could just go to, you know, church.

Our hero displaying half of his acting range. It's possible he is actually paralyzed and there are small motors inside his beard.Surveys tell us that 75% of Americans identify themselves as Christians. Despite this overwhelming majority, however, Christianity's influence on pop culture has always been marginal at best. For example, today's society holds that it's all right to ogle half-naked teenage girls, but try to talk one into the sack and suddenly you're some sort of sicko. How un-Christian! In a proper society based on the laws of Scripture, we'd bundle up the girls from birth, and three days after menarche they would be married off to the local bigshot wool merchant.

Other cultures are more open about mixing their religious life with their pop culture. Witness Iran's ultra-popular "Muhammed Bond" action film series, or Japan's "Shintorminator" franchise. Here in the states, the closest we've come lately to any open endorsement of religious views in our mass media is a movie where Jesus gets horsewhipped for seven hours, then the Romans paint celebratory frescoes with chunks of his flesh.

So I guess it's the recognition of this enormous untapped market that led to "Time Changer", a tale of a Christian man at a Christian seminary who is in the process of writing a book about Christian morality, and travels through time in order to talk to other Christians about Christianity, in the process realizing that you need to talk about Christ in order to be a good Christian, Christ Jesus Jesus. When I watched the film I started counting how many times someone said Jesus's name and got up to 44 before I lost count, and I wasn't even counting all the references to "Lord" and "King of Kings" and "Man from Galilee" and "Nazarene Ninepenny" and whatever other synonyms for Jesus the actors spouted when they wanted to mix things up. I guess I should mention that this is a Christian film, about Christ, just to make sure you don't get the wrong idea.

The movie opens in 1890, where two young boys are playing marbles on a perfectly tended lawn in front of a immaculately kept house. You instantly know that this is a good Christian neighborhood, because the sky is blue, the air is clear, and the two little boys are dressed to the nines with fobs and cravats and bow ties and all the other adornments that parents fantasize about their children wearing willingly. Sadly, the pounds of lard smeared into their hair has obviously soaked into their brains, because the boys are playing marbles on a blanket spread out over a grassy lawn. Undaunted, they roll the marbles around in their little dents, pretending they have a clue of what they are doing, probably because good Christian children would never be allowed to learn a wicked game like marbles anyway.

As the two boys amuse themselves, there is a third little boy hiding in the bushes, watching them and having un-Christian thoughts. You can tell that this third little boy is a bad little boy, because instead of properly tamed hair, he has a paperboy cap. A paperboy cap on a little boy is like a pointy goatee on a shifty-eyed man: it's the universal symbol that he's up to no good. And indeed, the little boy has spied the proper children's marbles. There's a close-up on his eyes as he gazes upon them longingly. He literally licks his lips with anticipation.

Just then, the mother of the two little angels comes out wearing an eighty-pound frilly satin dress and carrying a watering can, signifying that she is a good Christian wife and mother. She fetches the two boys and sends them inside and begins watering a flowerbed six feet from the marbles. Realizing that this is his chance, the bad little boy darts out from behind the bushes, grabs a handful of marbles, and begins to run off. The mother notices him and shouts for him to come back, but with her dress, girdle, and enormous wig, she can barely keep her spinal column from crumbling, much less run after him. Luckily the boy runs directly into Russell Carlisle, a seminary professor who looks like Will Ferrell after being told his whole family has died and he is only allowed to show the emotions of "surprise" and "concern".

Russell immediately starts lecturing the little boy on how wrong it is to steal marbles. You know that he is a good Christian because he refuses to use any contractions and generally acts like a cross between Abraham Lincoln and Data. The conversation includes exchanges like the following:

Russell: Young man, it is wrong to steal items from other people.
Child: I like marbles.

A quiet evening at home for Russell. Note the lamp.The boy thus straightened out, the scene then moves to the Grace Bible Seminary, which looks suspiciously like a modern college campus. Russell is sitting at a table with four old men, including Muttonchop, Neckless, and Maya Rudolph's Grandfather, all of whom chuckle like idiots after every line they utter, but finally decide to unanimously endorse Russell's latest book. Just as they are about to finish up, Dick Cheney hurries into the room and spoils the party by announcing that he will not endorse the book. The reason is shocking and unexpected: because it doesn't mention Jesus enough. Dick says that Jesus must be the reason behind every course of action in order for it to be valid, no matter what, and that the only reason that stealing is bad is because Jesus says it is bad. "We need to tell this boy that the Lord Jesus Christ said it is wrong to steal," he says. Of course, no one has mentioned any boy, and Dick wasn't present when the paperboy was stealing marbles earlier. (The most likely explanation is that Jesus told him about it.) Further, Dick says that if you're not going to bring Jesus into the discussion, you might as well not even tell the little boy that stealing is wrong. Keep that in mind, kids: unless you have specifically been told that Jesus frowns upon a certain activity, you have full permission to do it. Time Changer told you so.