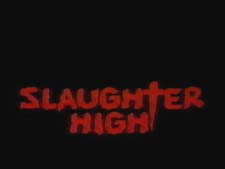 Overview: At their high school reunion, a nerd gets revenge on a group bullies who tormented him by killing them in a variety of perplexing and moronic ways.

The Case For: Some of the murder methods are genuinely gruesome, frequent pitch black shots make it easy to fall asleep, thus missing most of the movie.

The Case Against: There is no continuity whatsoever from one scene to the next, half the characters serve no purpose other than to die horribly, none of the characters elicit any sympathy, the ending makes too little sense to be measured by modern instruments. 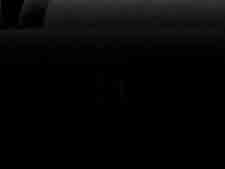 I swear, this is a real screenshot. The slightly lighter area toward the top is due to static.

I should say right off the bat that I didn't really see this movie. Before you get into a huff over my lack of journalistic integrity, let me explain a few things. First, I did sit through the entire movie, but the video was too damaged to really make out the images, second, this is a website. If you want journalistic integrity, go marry Bernard Shaw. Most of the movies that Lowtax sends me are stolen from video stores, often stained with blood and marked by the occasional bullet hole. I think they were once his personal copies, as they typically stink of sweat and refried beans. Not so for "Slaughter High." This one came wrapped in its original plastic, stink-free and pure. It was a rare treat to think that I would be the first person to view this particular copy of this stunningly bad movie. I unwrapped it with the anticipation of a schoolboy unfastening his first bra, but knowing that one of the breasts contained within was coated in a potent neurotoxin. Ah, childhood.

I popped the tape into my swanky VCR and pressed play. Much to my shock and chagrin, the entire movie was marred by almost constant static and distortion. I've watched the movie in two different VCRs and on two different televisions, but each time I faced the same problems that no amount of screwing with the tracking could fix. Maybe my copy was just a factory defect, maybe some higher power was trying to stop me from watching this orgasmically bad movie, I don't know. Due to this problem, the pictures in this article are not necessarily representative of any important plot points, but rather are the result of my grabbing screencaps of whatever was showing during the infrequent .00004 second breaks in the static. The rest of the movie looked something like this. But since half the movie was shot in pitch darkness, I don't think I missed all that much visually. In any case, between the video problems and the generally confusing writing and direction (both by George Dugdale), I have little to no idea what happens in this movie. But since you were thoughtful enough to click on the link to this review, the least I can do is piece together what I can and share with you the looming idiocy that is.... "Slaughter High." 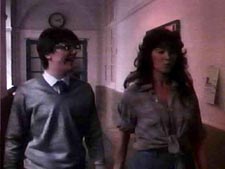 Marty and Carol enjoy a liesurely stroll down the only hallway in the school.

The movie opens with the title graphic scrolling up onto the screen, then shaking violently for some reason while a clown laughs. There is a quick cut to a shot of Doddsville High School as the laughter transitions into cheesy synth crap and then into a horrible attempt at a rock song. Inside, King Dweeb of Geektopia (A.K.A. Marty) walks down the hall, inexplicably accompanied by a decently attractive girl (Carol). Even more inexplicably, they seem to be about to have sex. Carol leads Marty into the girls' locker room, where about half of the action in the movie takes place because, let's face it, "Citizen Kane" this ain't. A bunch of kids with film equipment that no high school student in the eighties would ever have had, including a boom mic, follow them inside, chuckling. A conveniently placed gigantic calendar shows that the day is April first, prompting the incredibly irritating singer of the horrible attempt at a rock song to shout out "It's April Fool's Day!" I guess the calendar saying as much in huge letters is too subtle.

Carol and Marty go into separate shower stalls in the girls' locker room in order to disrobe. The film crew enters and quietly assumes their positions outside Marty's shower. Carol turns on his shower from outside of the stall somehow and tosses him what appears to be a gigantic freakish condom half-filled with shampoo. Being the suave ladies' man that he is, Marty inflates the condom like a balloon, then lets go of it, sending it flying over the shower wall. Obviously aroused by his experiment in aerodynamics, Marty shouts to Carol, "This is the best birthday I ever had." I have to say, if April Fool's Day is your birthday, your life is going to suck. He should have expected what he gets. One member of the film crew pulls open the shower curtain, another hoses Marty down, and another pokes him with a javelin (that's right, a javelin) while they all chant "April Fools! Where's the beef? Where's the beef? April Fools!" Get it? "Where's the beef?" I... uh... I hate my life. Marty staggers out of the shower, very wet and very naked. For some reason, he grabs the towel rack. For some totally different and never explicated reason, the towel rack is electrified, delivering a charge of a few hundred volts as soon as he grabs it. A few of the bullies, including one in a sinfully ugly jester mask, pick up Marty's nude body and dunk his head in the toilet. That's when the greatest gym teacher in the world shows up. This guy rules. He doesn't take any shit from anybody. Sadly, he only appears briefly. It's as if George Dugdale is taunting us, dangling an entertaining, if stereotypical character over our heads, then snatching him away and abandoning us to the mercies of Jester-Head and the Not Ready To Be Seen In Public Players. The gym teachers demands that the bullies report in the gym at 3:45 and that Marty get his naked ass out of the girls' locker room. The bullies, of course, blame Marty for this misfortune and vow revenge. 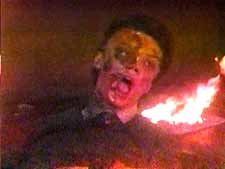 "Ow, my face is being seared off! This is sure teaching me a valuable lesson about smoking pot in school!"

When 3:45 rolls around, the entire bully crew shows up in the gym. Well, I thought it was the entire crew. The gym teacher insists two people are missing. I don't know how he can tell. Half of the bullies don't even have names. It's not like there are a lot of characters in this movie. We've basically met all of them already. You'd think they could at least all have names. Oh well. The two absent bullies are in the hall, where they give Marty an obviously phony apology and try to make it up to him by giving him a free joint. The problem - well, one of the problems - is that Marty is so obscenely nerdy that it is utterly impossible to have sympathy for him. Every time he opens his mouth, I want to smack him, but when I try I just keep hitting my hand on the TV screen.

Despite the fact that Carol set him up to be humiliated, he still thinks she really wants to have sex with him. I hate this kid. As Marty excuses himself to mix some chemicals in the science lab, the two bullies say that the joint is really going to get Marty messed up. Yes, nothing says, "I hate you, you nerd" better than giving someone really potent marijuana for free. Marty disappears into the lab, which is apparently just down the hall from the boys' locker room, which in turn is in the exact same location as the girls' locker room. I mean precisely the same location. The only thing that changes is the sign on the door. While mixing chemicals involving nitric acid, Marty decides to try the joint by lighting it with a bunsen burner. "Slaughter High" - all the fun of a high school lab safety instructional video in three times the length. Marty starts coughing from the weed, so he runs to the bathroom, which gives Skip (the bully in the jester mask) the chance to sneak into the lab and open a gas valve. When Marty comes back, stoned off his nerdy ass, his sciencing starts a fire and the entire lab explodes. Also, he knocks over the acid and burns off half his face. In my house, we used to put peanut butter on the telephone on April Fool's Day so people would get peanut butter in their ear, but I guess blowing the fuck out of people and destroying an entire laboratory is funny, too.

We flash forward an indiscriminate amount of time to the day of the bullies' class reunion. The entire gang shows up. At least I think it's the entire gang. There's no way to be certain. It gets kind of confusing here, so if you forget who's who (don't worry, it doesn't actually matter), just reference my easy-to-use character chart. It's both handy and dandy.

The doors to the school are locked, which strikes the gang as odd, but they don't seem to mind that the lights are out or that of their entire graduating class, they are the only ones there. Taking initiative, they all decide to wait outside the school until someone lets them in. That's in the early afternoon. In the next scene, it's the middle of the night, and they're still waiting outside. Uh, I don't think anyone's coming, guys. The apparently passed the time by drinking beer and smoking pot, but are completely unaffected by both. Skip and Joey, or possibly Skip and Frank, decide to break in through a window. I think it's safe to say that if you have to break into your high school reunion through a window, you may have come on the wrong day. A storm begins, forcing the rest of the gang inside. And thus, the scene is set for the next page.