Marc Rubin also skews pretty far to the right. He hates Muslims, liberals, and apparently my ears because holy fuck there's embedded audio everywhere. Thankfully, he doesn't seem to believe in conspiracies, so while some of his pages look like schizophrenic ramblings (multicolored fonts, fire GIFs everywhere), they're actually just badly designed musings on art. Incidentally, the guy is a fairly accomplished artist (at least in terms of the amount he has produced), which is why I cannot understand why he thinks any of these color schemes are appropriate for anything.

There's one thing Marc has that a lot of the sites I look at here don't have, and that's Flash. Everywhere. I don't mean stupid little Flash menus and stuff, though, rest assured, those are there, too. I mean dude has fucking Flash movies. Like all over the place. The most notable is the "Not So Grimm Tale of Hairmerica," which apparently was well-loved by the people over at breitbart.com. Whether that's a worse indictment of their politics or their taste, I'll leave to the reader to decide, because I seriously couldn't sit through more than two minutes of the (I swear to God) EIGHTEEN-MINUTE- LONG MOVIE.

I should also say this - I don't think I've ever before seen animated GIFs in a Flash movie, but it's an almost hypnotic thing to try to keep track of all the different animations going at once. Keep an eye out for the friendly sliding bear! 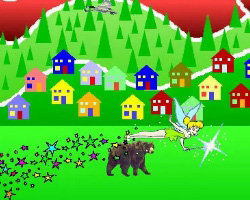