Who doesn't love hippie economics? Sure, on the surface everything is supposed to be communal, and people share stuff like home-grown carrots and flaxseed oil, but in reality, it's all about the big steal. Devote a bit of time to learning an "organic" form of art like wire-wrapping, throw in a little talk about chakras, then strike it rich by targeting people with a poor sense of value and even poorer taste!

We can argue for hours about the ridiculousness of phrases like "hippie bling," which had better not be used by anyone but the guy who runs this site or I'm gonna get pissed, but I think we can all agree that charging $1200 for a fucking wire-wrap thing that's supposed to aid in crystal healing is completely insane. Hell, I'd say it's borderline evil. Not only does it support a pseudo-science that distracts people from actually getting healthy by going to a goddamn doctor, but also it allows a shitty pseudo-artist to profit lavishly from doing so. Gross. 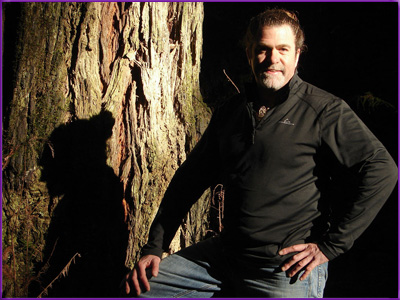 Anyway, look at the photo above: This is the artist, "Farris," and you'll notice his shadow looks like the shadow of a garden gnome. If bad movie posters have taught me anything, it's "Whatever your shadow looks like, that's what you really are. On the inside." So people should definitely be more careful around him.

Or maybe ... maybe these things really do work! Perhaps "Farris" is a clever gnome, and his jewelry is the key to his power. That thing around his neck is a secret talisman, and he transfers his gnomedom chakra into the crystals, selling it to strangers so that they become gnomes and he is free to enjoy immortality - until the last owner dies, and he must begin constructing curse-holders again.

Alternately, maybe he's just a sham of a shaman making a quick buck by peddling snake-oil jewelry to wealthy naifs.