Kids these days have self-esteem issues; no one's going to argue that. Whether it's because they have the wrong Power Ranger on their backpack or because their dad is gay or whatever, they're gonna end up getting made fun of one way or the other. And to an 8 year old, what other 8 year olds think of you is really important. I know that's hard to process, because 8 year olds are pretty stupid, but their opinions matter to some people (and those people are also pretty stupid). But I digress. Kids have feelings, sometimes they get hurt and the kids feel bad.

Anyway, some lady named Missie Shealey has written a book that allegedly helps kids get over that phase in their lives where they care about what other people think. From the Web site, I can tell you two things about this book: it's called Pookie Lookie, which I feel guilty for italicizing because it implies it's a real book, and it's about a panda with eczema and maybe a lazy eye? I dunno. Anyway, like I said, it's going to help your kid improve his or her self-esteem, I assume by giving all children something to feel superior to. After all, what's worse than being a member of a species near extinction, especially one with a skin problem?

Oh wait, I found an answer to that in the quick little biography of Missie Shealey (seriously, ugh). The worst thing is that she's a self-described "mompreneur," which is like being a mom and an entrepreneur, but missing a syllable. Not unlike being a businessm. Apparently being a mompreneur means starting an awkward childrens' book series and then charging parents exorbitant fees to have parties based around the character you have a monopoly on. Seriously, $1600 for a "Pookie Lookie Pow Wow Kit," which is basically a mascot costume you'll use once before whatever cheap Chinese fiber it's made of gives YOU eczema. Oh, and God damnit, there are Pookie Lookie shoes.

There's actually not much to see here, Web site-wise. Lots of Comic Sans, but not a lot of pages total. The "Parent Support" section, which I was banking on being awesome, is under construction. The Myspace doesn't offer much either, besides an equally boring but slightly longer history of the book. You know what would be neat, though? If any of you, dear readers, have actually seen any of this stuff in real life. It'd be even better if there were pictures, or if the stories were funny. Maybe the big blotchy panda terrified a class of kindergarteners or something. Anyway, if you've seen any of this crap around, and if it's at all worth your time to type it up AND my time to read it, send me an e-mail at my address below. If I get enough good stuff, I'll try to do a follow-up, maybe uncover some mysterious secrets... 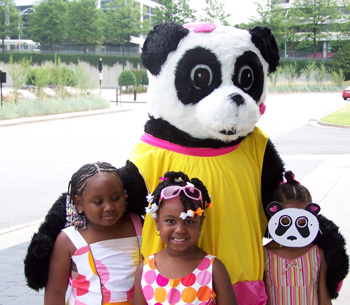