Alright, I'm clicking around Rhonda's Realeases and honestly I can't tell you what's going on here. The woman on here looks like maybe she was in pageants or something. I think maybe she makes music - there is a link for videos but I can't get them to work, really. Maybe she wants to be a model? But I figure at least a model would try to get the images of herself sized correctly so they wouldn't be all weirdly stretched out. Oh, hey, she does make music! (Holy shit, every fucking page in the music section is an "absolute laughing riot," to quote Rhonda's description of her song "My House Got Egged." -- GD) Let's check out "Split Peas," which has its own separate link. At first it sounded like she was singing to children, but it's a pretty bad message so maybe she isn't. I don't know what it has to do with soup.

Oh, here's a vague link - "What happened in the cabin?" Maybe this is one of those alternate reality games I've heard about. Nope, it's a camcorder video played on a TV recorded by a digital camcorder and than coded into QuickTime. Oh, here's something - "For Good of the People." It's a book! And a CD! And the cover features her torso clad in a jacket and lacy boyshorts. Now I'm even more confused. Is she a stripper? For a second I thought maybe she was a Libertarian but I can't figure out what the fuck this book is about.

"Club of Hearts?" Oh, it's a page where you can buy her stuff, including her on a T-shirt and a poster of that torso image that went on "For Good of the People." It looks like maybe she's wearing a chastity belt on the part of her waist above the boyshorts. Doesn't seem like it'd work too well, especially if she's flashing people like that. Oh! Speaking of, there's a "Fun Photo Page." She's very smiley and loves America. Also your cursor is a 747 now. Not sure what that means. America takes to the skies! 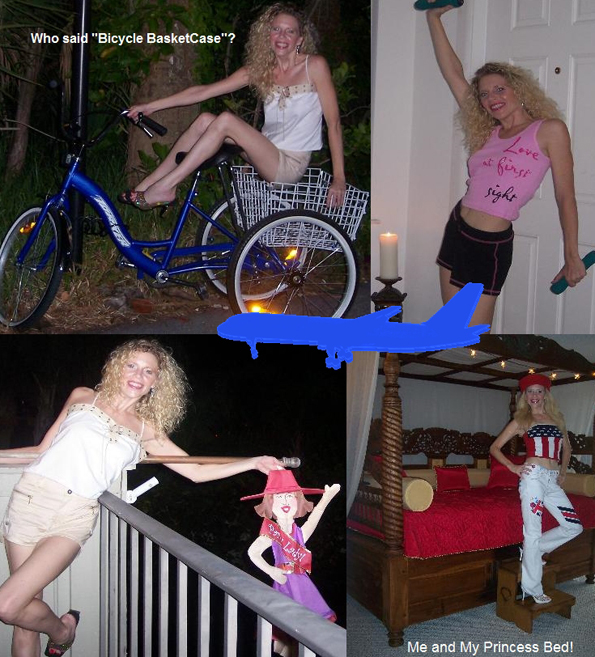 What's new with Rhonda? Oh! Apparently "Split Peas" is going to be a film, and she's going to be a screen/songwriter, actress, and director. That's good. That's great for her. Also, there are unicorns and I guess a statement of what "corporate Rhonda" entails. This is a lot. This actually might be too much; I'm not sure I'm getting it all. Okay, and now here's a guy hitting on her in a poem.

I can't make this any more coherent than it is - I think you have to experience it like that. It's like life. Just click around, see what works and what doesn't. Just experience it. Don't think, do. Maybe you'll experience it differently! Maybe your perspective is different than mine. Maybe the negligible amount of traffic combined with the high bandwidth costs of hosting MPEGs on your personal Web site will cause it to crash mere hours after publication. There's only one way to find out. Click.