The Masters of Animation: Vol. 1 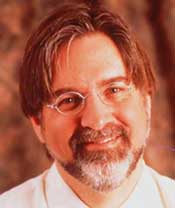 For over 20 years cartoonist Matt Groening (pronounced GROW-EN-ING) has been the unkempt face of the billion-dollar franchise The Simpsons. He is the person generally considered most responsible for the creation of the series and its success and obviously, he is a very rich man because of it. But something has always eluded me about Groening's success that I have never been able to pinpoint until now.

Nothing he has ever written has been funny. He has never said anything funny in interviews or at nerd conventions. He isn't funny on The Simpsons DVD episode commentaries. The man simply isn't funny in any way, shape or form.

The original Simpsons shorts weren't funny. They were great only because Tracy Ullman was so painful to watch. Life in Hell isn't funny. It's one of those comics that you read and go, "Hum, that's interesting. I too hate when people use that word I guess." Daily comic strips by definition aren't funny. They wouldn't even exist if people didn't have to do things like ride the subway or take a dump at work on the company's dime. Some mentally unstable people buy whole books of that crap, but that's it.

Why then is the least funny cartoonist on the planet responsible for the funniest and greatest television comedy of all time? Sam Fucking Simon, that's why.

Sam Simon, who lives in a solid gold house on an island that floats in the sky under the power of his own eccentricity, is the reason The Simpsons survived those first few shaky years. To say that I am bitter that Simon, whose credits include Cheers and Taxi, receives little credit for what is perhaps his greatest television achievement is an understatement. 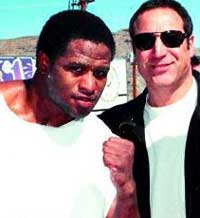 Sam Simon poses here with his slave.Sure, he continues to receive millions of dollars a year and an executive producer credit on a show he left 13 years ago, but that isn't enough I say! His recent 60 Minutes interview was his chance to expose what a fraud Matt Groening truly is but he took the high road and just exposed how in love with dogs he is. Weird-o...

I on the other hand refuse to take the high road. The truth must be told. Matt Groening had nothing to do with The Simpsons being funny. He is, at most, responsible for the laughable doodles that led to the creation of the series.

Sam Simon and the rest of the writers who were there for those first few seasons were faced with the monumental task of turning Groening's hunk of shit into a hit TV show or else James L. Brooks would eat them. Because he's fat you see. Look, I defy you find anything from season 17 of The Simpsons that's funnier than the idea of James L. Brooks eating Sam Simon and the entire 1st season writing staff because they failed to make Matt Groening's ugly cartoon family funny. I will give you my unopened copy of Radiant Silvergun if you do, I swear.

Because he managed to draw basic shapes that somehow resembled humans he named after his stupid family, little could be done about Groening. Simon and The Simpsons staff simply worked around his contributions and a bunch of Korean animators that couldn't follow simple instructions like, "Smithers isn't black so please don't draw Smithers black for God's sake." If there was a joke on The Simpsons that fell flat and didn't make you laugh you can be sure that either Groening was responsible for it or it was part of any episode after season eight.

While Fox was eager to order more episodes after the first season, it was apparent that something had to be done about Groening if the show was to continue being a success. It was then that Simon hatched his most genius plan yet. An insider tells me that by day The Simpsons staff would work on the "Groening version" of the show. After Groening went home for the day the writers would return to the magical place where ever cartoons are made and work on the good version, ignoring all of Groening's notes and suggestions. When it was time to submit the episode to the network for airing, Simon would make the switch.

By season 3 Groening realized what was going on. While at a local bar he noticed that people were actually laughing in response to a Simpsons episode. Furious, he returned to the studio and demanded that Simon be fired in one of his famous temper tantrums. Instead, Simon left the show for good citing "creative differences" and never looked back. Fortunately for Sam, his contract included a generous severance package and the condition that he didn't have to be married to Jennifer Tilly anymore. 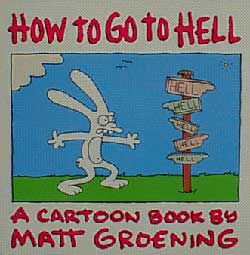 I have a really unnatural hatred for cartoonists and their creations. Perhaps it stems from some intense jealousy that I've never been able to come to terms with. Probably!Matt Groening eventually realized what an integral asset his writers were, backed off and let them do their thing. A bunch of Harvard alumnis took the show to new heights through the 4th, 5th, and 6th seasons and then it all went downhill from there.

In 1995 he rewarded those who helped make The Simpsons a success by getting all pissy over the episode featuring the guy from The Critic. Sure, it was a thinly veiled attempt by Al Jean and Mike Reiss at cross promoting another stupid cartoon show, but it was a damn good thinly veiled attempt at cross promoting another stupid cartoon show. It was the first and only episode that Groening willfully took his name off of since he had nothing to do with making it funny. Now if only he could do that for the other 400 episodes.

The Groening-Simon feud is one that has, much to the relief of Groening, pretty much been left behind closed doors. But you can bet that behind those doors there have been shouting matches, fistfights, and Royal Rumbles between Simon and Groening about the direction of the show and the general girth and promiscuity of their respective mothers. Simon would eventually leave The Simpsons after failing to undue Groening's grasp of his doodles that he, along with the help of the writing staff, nurtured into a hit.

Today, Sam Simon spends his free time dressing up dogs in Halloween costumes and driving a van around inner city communities giving free medical care to poor animals like some kind of dog angel. If only everybody was as sweet as Sam Simon, there would be no need for heaven. We'd already be there.