Out of all the ALOD categories, "bad webcomic" has to be my favorite. Almost nowhere else on the Internet do we get to see such gratuitous displays of self-deception when it comes to talent. Ravy Comics has it all - sprites, poorly written and unnatural dialogue, terrible sex jokes, and conveniently shifting female sexuality. I found all these things on the site within five minutes. It's making my job too easy.

It's much more difficult to figure out what, exactly, Ravy Comics is actually about. It has a lot of characters, and there doesn't seem to be any discernible story arc that lasts longer than four comics. Again, I'm not looking through these particularly closely, because even I have better ways to spend my time. But yeah, on a surface level, starting with "Ravy 2011," I can't tell what's going on at all. The comics that lead nowhere don't help, though looking at the guy's influences, I can't say I'm surprised. According to the links page, he likes Bloom County enough to link it twice (which is fine, Bloom County is great), but he's also pretty into Beetle Bailey and Garfield. So I guess it's understandable that this guy writes a ton of three-panel comics where nothing happens in the second panel. He learned from the master, Jim Davis.

Unfortunately, it seems that the earliest Ravy Comics are lost to history. The timeline starts at "season" 13, which is an odd way to organize comics, and hoo-boy. I mean just take a gander: 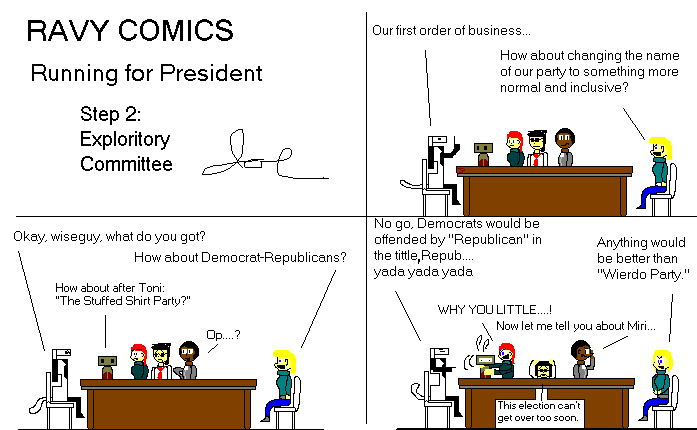 I guess I can't blame the guy for switching to sprites. At least he understands what a completely inept artist he is. Congrats, guy - you're not capable of total self-deception.

Oh, I should also mention the amazing copyright page. As submitter wit pointed out, it's pretty hilarious how this guy tries to excuse his own character-likeness theft and gets really defensive whenever he thinks about someone else doing it. Speaking of, I find it hard to believe that anyone has ever made the Ravy Comics fanfiction alluded to in the copyright notice. If anyone finds any, send it my way - I'm sure whatever site hosts it will be perfect for an ALOD.