Are you a record-breaker seeking the company of fellow record-breakers so you can swap stories about your feats, and perhaps form an intense rivalry? Are you fed up with Guinness World Records' monopolization of record-breaker culture and their stupid insistence on "accuracy?" Well, then, The International World Record Breakers' Club (also known as "Rekord-Klub SAXONIA") wants you!

Just take a look at this list of all the amazing world records members of Rekord-Klub SAXONIA have beaten. Here's a small sampling: 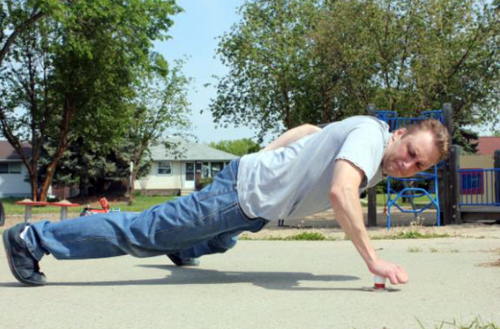 Are all these records making you feel inadequate? Well, you too can become a member of The International World Record Breakers' Club if you just believe in yourself and make up a new inane record category! In this PDF file, prolific record-breaker Darryl Learie will inspire you to follow in his footsteps and become a pioneer in the art of doing push-ups on eggs:

I knew I could get this on the most epic push-up listings of world records on the internet - I had too, that list is the first link to pop on line after one 'Google's' "push-ups" + "world records" (it must be seen by millions?).

I wanted to be, at least the pioneer of a new record category - to push what's possible into reality for all to see. Sure, it will be broken - that's a certainty, but I will have inspired others to push themselves in a stricter criterion than 2 armed, push-ups on 2 eggs.

Hmm, what about... push-ups on three eggs??? Sounds impossible, right? Well, not until you learn impossibility is just an illusion:

What is possible? Man cannot fly with-out the aid of some machine - false. If the conditions are right, say a hurricane or even a tornado, than a man can indeed fly for a time and although very improbable even land safely again when such pressures retire (although probably not a good idea).

Boy howdy, doesn't that just pump you full of inspiration?

The rest of the file is just a long list of dedications, which I'll paraphrase here: Thank you, beloved daughter/lifelong friend/push-up-record peer, for believing in me and supporting my meaningless quest to break the world record for doing one-armed pushups with my hand on a raw egg (seven). I must go forth and tell my inspiring, self-congratulatory tale of overcoming zero adversity to the people!