Sin City: A Dame to Kill For; When the Game Stands Tall; What If; If I Stay; Jarhead 2: Field of Fire

It had to happen sooner or later. The ball-smashing badness of August finally caught up with us. We have five films on deck this week, and only one of them managed to score more than ten points. How much more? You'll have to read on to find out. I'm not giving away our Movie of the Week trophy that easily.

Sin City: A Dame to Kill For

EXPECTATIONS: I've never been so excited for a movie I know I'm going to hate. I was a huge fan of Sin City, but as the years waned on and Robert Rodriguez kept promising the sequel was coming out "next fall," I lost interest and I lost hope. The replacement casting of Josh Brolin as Dwight in a story I never particularly enjoyed in the first place, the loss of both Brittany Murphy and Michael Clarke Duncan and the announcement of a new, Nancy-centric story only gave weight to my feelings of absolute dread as I glumly handed my money to the girl behind the counter.

And yet, as the theater lights went dim, somewhere inside was this faint glimmer of hope, the remembrance of how deeply I loved the first one, a chill of long-buried anticipation I hadn't felt since Revenge of the Sith. That turned out great, right? Oh wait, no, it sucked.

REALITY: The best way to sum up A Dame to Kill For is "direct to DVD." Everything about it looks like a cheap, cash-grab knock-off of the original. It's not awful... it's just not Sin City. 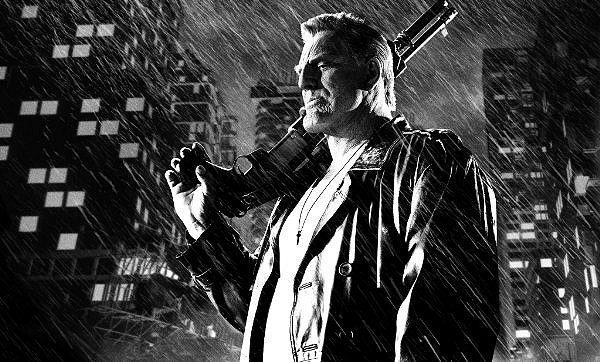 
A sequel and a prequel all in one, A Dame to Kill For is made up of four Sin City yarns: "A Dame to Kill For," "Just Another Saturday Night," (printed in Booze, Broads and Bullets) "The Long Bad Night" and "Nancy's Last Dance." (Miller wrote the latter two for this film).

Dwight McCarthy (Josh Brolin, stepping into Clive Owen's red Converse) reunites with the titular dame worth killing for (Eva Green) while Nancy Callahan (Jessica Alba) mourns the loss of John Hartigan (Bruce Willis) by drinking and stripping (the third and fourth stages of grief, respectively). Marv (Mickey Rourke) tries to remember how he killed so many frat boys, while Johnny (Joseph Gordon-Levitt) tries to beat Senator Roark (Powers Boothe) at a not-so-friendly game of poker. 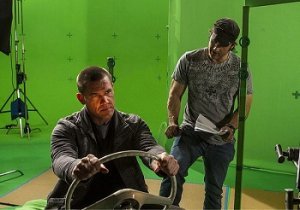 "While you're at it, make some VROOM VROOM noises."I'm going to be a real nerd about this and point out how deeply "A Dame to Kill For" is shredded. One of Sin City's biggest points of pride was its faithfulness to the source material, but in "Dame," whole characters are abandoned, presumably so Rodriguez and Miller have time to cram four hefty storylines and Lady Gaga cameos between the opening and ending credits. They took what wasn't a great story to begin with and stripped out what little it had going for it, leaving behind a boring, faux-pulpy mess that makes no goddamn sense whatsoever.

Shellie (Brittany Murphy), Dwight's boss Agamemnon and Dwight's landlady are conspicuously absent. Murphy died in 2009, so her absence seems deliberate and respectful (although Dennis Haysbert was an spot-on choice to replace Duncan, who died in 2012). But without her - or anyone else except Ava, Marv and a considerably shortchanged Gail (Rosario Dawson) - Dwight exists in a vacuum. It's in interacting with other characters, even in minor cameos, that bring characters to life in any movie, and without them, all "Dame" becomes is a story about a guy who's mad at his perpetually naked ex-girlfriend and then brutally murders her. I don't care that it's not faithful to the story. I care that it makes the story a shittier one than it started out being, and Frank Miller being the one behind the camera makes it all the worse.

By contrast, "The Long Bad Night," starring the exceptionally handsome Joseph Gordon-Levitt, thrives on these minor interactions, whether with waitress Bertha (Lady Gaga), smack-shooting sawbones Dr. Kroenig (Christopher Lloyd) or Senator Roark. It brings the city to life, and the city itself is one of the best characters in the series. 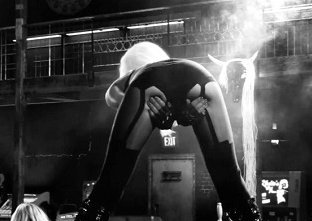 Nancy's Ace Ventura-inspired burlesque really wows the crowds."Nancy's Last Dance" is freshman-year garbage, plain and simple. Everything about it is useless, stinking with the paperback reek of Mike Hammer novels stacked in a tribly. The same goes for "Just Another Saturday Night," with Mickey Rourke stripping all the sad, noble brutality he delivered in "The Hard Goodbye" in favor of being a pair of fists with a growly voice. Rourke looks tired and puffy, and Rodriguez shooting him from the front instead of from the side and top (as he did in Sin City, highlighting the chin and forehead prosthetics that turned Rourke's bad plastic job into Marv's battered mug) only makes him look that much worse.

Setting wise, Basin City itself doesn't even look the same. The streets are empty and lifeless, a hard reminder that not only is the city itself a fiction, but that there is no backlot, no scenery, nothing to tie the movie into the physical realm. It's distracting and off-putting, drawing the viewer out of what was once a world richly populated with garbage and cop cars and killer hookers. I don't mean to geek out about this kind of stuff, but it matters. When you've got a setting that is as much of a character as the flesh and blood leads, you need to have some consistency in order to establish that sense of place. Give us graffiti and bums and something besides CGI smoke to bring these nasty streets back to life.

There are dames, and there is plenty of killing, but I'm not sure any of it was worth the nine-year wait, weak cast changes or the matinee price of admission. Fold your cards now, Rodriguez. Your luck is wearing thin.

MINORITY REPORT: Sin City may not have aged all that well, but Sin City 2 has already given me one of my new favorite photos, with Danny Trejo grinning like a jackass while Frank Miller melts right next to him. I'm chalking this one up as a win for now. - Joseph "Jay Dub" Wade