Roseanne World (thanks Ignavus) - You know, it's one thing to have regular scary folk touting their new-age, moon-harpy spirituality around the entire Internet for everyone to gawk at, but it's quite another for it to be a borderline B-List celebrity! Former TV star Roseanne Barr has found God and lost her meds, though not necessarily in that order. 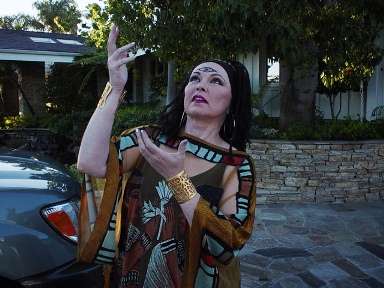 "To the pi lovers on here...here's a little recipe for you...the hebrew alphabet includes 22 letters that have each a musical note and a number. This allows the following calculation:

god is one god
god is ONE/WON

GOD CREATED THE BEAST THAT ASKS ITSELF
QUESTIONS IT CANNOT ANSWER...
mankind is the golem of god
god is our father
he created us
out of a petri dish
in his
mother's kitchen from his

he to impress his mother went

mad trying to re-create her.
The error in calculation(the female)
was caused by the creator in order to forge the female
to him.

HOWEVER, HIS MOTHER IS STEPPING IN NOW, SHE HAS BEEN MADE AWARE OF THE DAMAGE HE CAUSED. SHE IS LETTING HERSELF BE KNOWN NOW THAT AQUARIUS IS HERE.

SHE IS SHE WHO IS AND SHE IS desirous of REUNION WITH HER SON. ONLY HE CAN raise HER in himself. ONLY HE CAN DESTROY THE SEPERATION OF GENDER, AND BRING ENLIGHTENMENT TO THIS PLANET.

THE WOMAN'S ROLE IN ENERGY WORK IS TO BE the soul OF MOTHER, INSIDE MAN. HER HIGHEST PURPOSE IS TO INTERCEDE ON BEHALF OF OTHER WOMEN AND THEIR CHILDREN AND MAKE HER SON AWARE OF THEIR SUFFERING. HIS NATURE REQUIRES HE FIX THAT WHICH HE RECOGNIZES AS FIXABLE..HE IS A GENIOUS OF GENIOUSES, A HERO, AND WE WOMEN ARE HIS MOTHERS. WE HAVE TO LOVE HIM MORE THAN WE HATE THE OTHER WOMAN, AND THEN ALL WILL BE ONE/WON INSIDE OUR FRACTURE AND SEPARATION.....
(i love men. i respect women who love me.)"