Shoplifters of the world wide web, unite! Tumblr's "lifting community" is a burgeoning subculture of young girls who steal makeup and clothes, then brag about their ill-gotten gains for all to see. You can find some of them by sifting through tags like #shoplifting, #five finger discount, and #liftshopping. 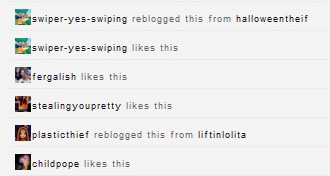 These thievin' teens post pictures of their hauls, itemize them into lists, and tally up the money they saved, with many proudly including their total lifetime savings in their description. They support each other by sharing tips for evading security, removing those bothersome tags, and giving "baby lifters" encouragement as they take the first steps on their path to a life of crime. It's endearing, in a way. 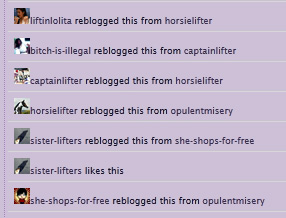 Unfortunately, the community has been in freefall as of late. Self-righteous do-gooders have been using the tags to scold them, which is totally unfair since it's not like they were breaking any commandments or anything. There are also doxxing threats from vigilante trolls, forcing many lifters to hide the evidence by deactivating their blogs or, because this is Tumblr, putting up a disclaimer saying they're just "roleplaying."

Many justify their illicit hobby by insisting they're striking a major blow against global capitalism. Others talk about how they donate their surplus loot to charity, which somehow still isn't enough to satisfy everyone, as user "i don't feel like paying" bemoaned in a now-deleted post:

universe y are you fucking with me???? Before I went lifting I dropped off seven boxes of stuff at a shelter!!! I literally donated to charity today and this happens?? I get bad lifting juju for no reason?????? WHo is fuckin with me?????????? BUH.

Lifting isn't for the faint of heart, or the darker-hued. Still, if you can handle the heat and the occasional hex, you can work your way up to the lifting community big leagues: stealing vacuum cleaners. May the lifting gods smile upon you.