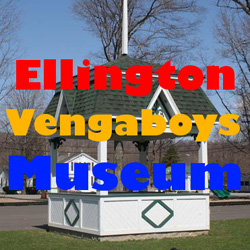 The Ellington Vengaboys Museum is a fansite dedicated to a Dutch Eurodance band that was briefly popular in the late 1990s. It's run by a small-town farm boy who calls himself "The Curator." He's a pretty paranoid dude - he says he's a conspiracy theorist who "could tell you about anything you want to know about the 'Power behind the curtain' that runs earth" - which might explain why the first page is nothing but copyright notices and a link to the Wikipedia article on "fair use." Dude, I think you're in the clear.

Like any respectable Vengaboys fansite, the Museum features lots of photos ("Check out the Infinite Vengaboys Museum Photo Gallery... Let us know if you reach the bottom or if you disappear to who knows where in the gallary!"), not to mention the Internet's largest and likely only collection of Vengaboys screensavers. There's also a "recent news" section, which consists of two updates: A Facebook post from December 2014 revealing that one of the members is pregnant, and a @vengafans Tweet from May 2013 about how another member was pregnant, plus a bonus text message where The Curator gets the 2013 pregnancy (a hot tip from "the higher up fans") confirmed by a Vengaboys member (or someone he's assigned a Vengaboys member's name on his phone).

On the Member Profiles page, The Curator wrote a rather lengthy profile of himself that reveals his Zodiac sign, his favorite food ("Chocolate with Milk"), his favorite quote (an 80-word all-caps rant from Portal 2), and his bizarre fear of girls, which raises a lot of questions about his behavior in high school:

I Just Stay Friends with People and NOTHING else!! Never going to get married, even to afraid to talk to a hot girl because in High school all the hot girls had jerk boyfriends who where as wide as they where tall that would beat the living shit out of you if you took even ONE brief look at their girlfriends... I WON'T EVEN DARE TO EVEN ASK A HOT GIRL OUT, BETTER YET EVEN DARE LOOK AT ONE!!!

One of The Curator's ultimate dream goals is getting the Vengaboys to visit him in rural Ellington, NY so he can pitch them on his idea for a Vengaboys movie, which he describes as "a science fiction thriller/action/adventure story about a levitating island." He has some great ideas on how to get noticed:

1. He encourages people to print out and wear a special image:

What we want you to do is if you go to a Vengaboys concert, PRINT ONE OF THESE OUT (IN COLOR) and use safety pins to attach it to the front of your shirt. (Like a marathon runner does with that paper with their number printed on it.) ... By doing this, you may draw the attention the actual Vengaboys members themselves at a live concert because these promotions are designed with bright colors and odd contrasts to draw attention to them.

2. He sent the band creepypasta:

2012 - 2013: during this time the Curator contacts Robin by getting his attention with a creepy pasta of a cursed vengaboys music video (Up and Down). his attention getter works.

By the way, if you happen to be a member of Vengaboys, please visit this page so you can arrange a meeting with The Curator. Don't worry, even though he's your number one fan, he's not that kind of fan:

most fans would scream their heads off the first time they meet you in person or try to do something crazy, i will never do that and will probably only shake your hand when you first meet me after i asked you if i could,

Most fans would be obsessed with asking you a ton of questions one right after another, i may only ask one or two such as "what kind of cakes you want with the dinner?", or "would you like to play a game of Newer Super Mario Bros with me".

Much as The Curator isn't like "most fans," The Museum isn't like most fansites! It is the Vengaboys fansite of the millennium, as foretold by a prophecy. Watch this bombastic auto-playing video, and you too will be a believer.