The Bad Boys of Pleasure Island (Thanks, Over There!) (NSFW!)

The Bad Boys of Pleasure Island (not safe for work!) is an up-and-coming Tumblr blog that expands and updates the mythos of Disney's Pinocchio for a new generation. Remember the part when Pinocchio and all his rowdy friends go to Paradise Island and (spoiler) get turned into donkeys? Well, given that you're using the Internet to read this, you shouldn't be the least bit surprised to learn that it's been warped into a weird sex thing. Of course it has.

With the magic of Photoshop, BBoPI is able to bring you incredibly life-like simulations of QT white boys becoming donkeys. I like how chill and nonplussed this guy is about the whole ordeal. "Yeah, I have huge donkey ears coming out of my head... problem?" This other guy, not so much. 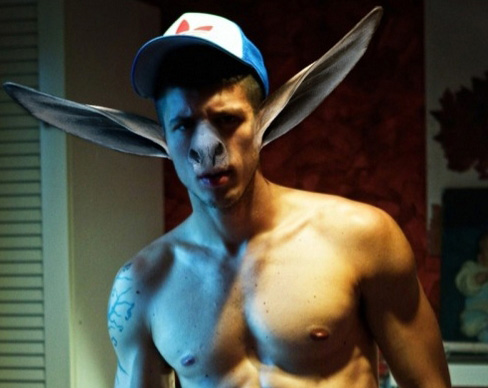 In addition to goofy images of the "bad boys," you also get a dumb little storyline to go along with it. The premise is that Paradise Island's current proprietors have tweaked their business model to keep up with changing tastes in the market for half-men, half-donkey abominations:

You'll find everything concerning our technology, different stories of the island patrons, even ways to specifically target changes for a bad boy of your entourage!

BBoPI meticulously documents every transformation, which leads to plenty of half-assed ass puns:

This leaded to most of the transforming boys to show off their bare asses and longer cocks (more on that latter). Knowing this, we added a chemical component in our products that would make all our clients temporally gay and hornier. This leads to a lot of sexual activity on the Island, the pleasure of it making our boys making asses of themselves even faster!

This doesn't sound canon at all!

The process of luring bad boys to a mysterious island and genetically altering them raises a lot of ethical issues. Luckily, the current maintainer is here to answer your questions, provided that they're sexy enough. As for the previous guy, it looks like he might've become one of the bad boys himself:

Please excuse us for the lack of recent update but the previous community manager of the Island has been very lazy lately, which led him to start a new job in the Salt Mines. We'll be back very shortly with new posts!