The self-publishing revolution has been great for independent authors. It allows us to place our work in the same marketplace as mass-market novels and nonfiction books by corporate publishers. Perhaps more importantly, it gives the mentally ill a place to showcase their agendas and/or internal realities! The Henry Dargers of the 2010s don't lock their crazy up in the attic to be discovered after death. It's here, it's for sale, and you're missing out if you don't at least skim what they have to say! 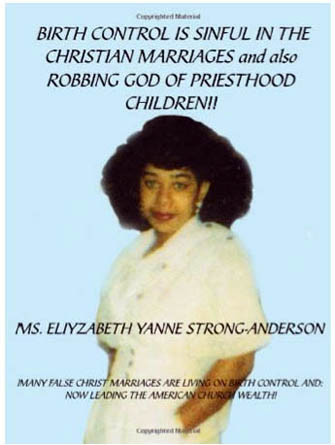 Let's start with "Birth Control Is Sinful In The Christian Marriages And Also Robbing God Of Priesthood Children," a mouthful of a title from Eliyzabeth Yanne Strong-Anderson. It's a 648-page all-caps screed, broken up not by traditional punctuation, but by asterisks and angle-brackets. As a result, it reads uncannily like LISP, COBOL, or some other ancient programming language.


There's a "Look Inside" available, but it only exposes six pages of this masterpiece. You'll have to cough up more than a hundred bucks to get the full picture. 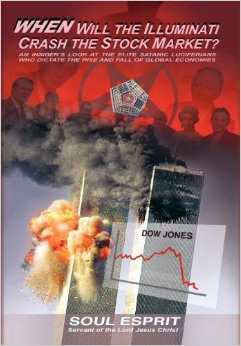 Soul Esprit is the nom de plume behind "When Will The Illuminati Crash The Stock Market?", a book that insists a global conspiracy group will systematically devalue public companies in America. Mr Esprit somehow misses the point that members of a global conspiracy group would probably want to keep society stable so they could use their money as power in a society based on leisure. The book also declares that the illuminati will destroy 93% of the world's population when they crash the stock market, which sounds like a good way to make sure there's no one left to mow their lawns.

Soul Esprit also wrote "Genesis 1:29 Diet: Perfect Health Without Doctors, Hospitals, or Pharmaceutical Drugs", though, so maybe he's not the most reliable investment advisor, or doctor, or author.

Before we get much further, make no mistake: These are tragedies, lives lost to the firm grip of illness that we can't truly comprehend ourselves. Living your life under a cloud of oppressive fear, with dark figures looming at the edge of your vision, would make anyone go completely nuts. The fact that they can still slam words into a computer through the fog of insanity should be inspiration for the rest of us. 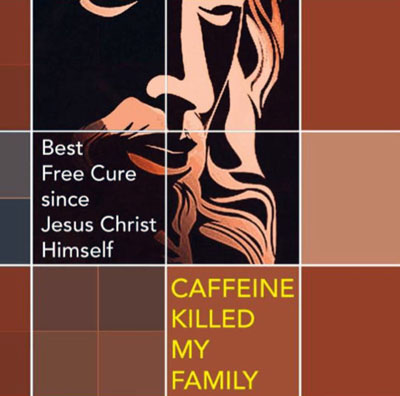 Lynette Ann Yount, for example, believes that caffeine killed her entire ancestral family, and that the world must cease the use of caffeine in order to guarantee the survival of humanity. "Caffeine Killed My Family" is her tale of battling Huntington's Disease, a degenerative brain disorder that causes loss of reasoning abilities. She claims to have cured Huntington's, though her progress from engineer to anti-caffeine advocate seems to serve as a vivid illustration of the disease's effects on cognition. 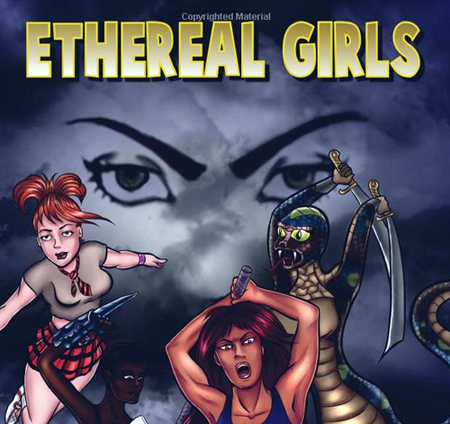 Before you get too bummed out, let me share with you a pedophilia-bent boobs-and-butt story called "Ethereal Girls." It's about teenage girls, and they're magic, and you can see their boobs and their butts, because the author, Noah Murphy, goes into great detail about them. There are also some teenage-girl snake-people, whose boobs you can also see. There is killing, and bosoms heave as the magic girls do their killing.

And in case you haven't magical-boobed enough, he's written a sequel, where a parrot-elf teenage girl heaves her parrot boobs while doing battle with other magical creatures. It's illegal-titted insanity, and if you haven't caught the vibe that the author has maybe already killed a teenage girl and violated the corpse, there's a chance that you'd genuinely enjoy his work. 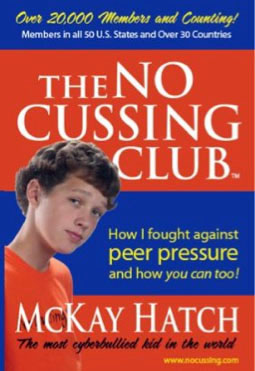 My favorite crazy-book of all time, though, has to be "The No Cussing Club" by McKay Hatch, a teenage boy whose parents are using him as a pawn to promote a bizarre profanity-free existence. Apparently he never says the s-word, or the f-word, or the a-word, and probably not fart, crap, hogwash, or dangnammit, either. The cover boasts that more than 20,000 people have joined the No Cussing Club, though no one knows how many teens have joined without their weirdo parents standing behind them as they fill out the e-form. His author byline touts him as "The most cyberbullied kid in the world," and I feel bad for him. Really bad. I also understand why he is cyberbullied all the time.

Despite the fact that mental illness can be inheritable, and that an abusive or totalitarian upbringing can set off latent mental illness, this last book gives me great hope. Not only am I 100% sure that McKay Hatch turns up the shower or radio and whispers "shit. shit. ass. shit. fffffuck. fuck" to himself at least once a week, but also I'm confident that he will at some point change his name and forge his own life, away from the insanity of his family, and away from the cyberbullies. A life of peace, solitude, and probably a fuckton of cussing.