For kids, Halloween means candy and the faint threat of candy-poisoning. For adults, it means giving candy to kids, getting to know other parents in your neighborhood, and enjoying the harvest spirit. Hahaha just kidding, it means degrading yourself by putting on an adult Halloween costume! 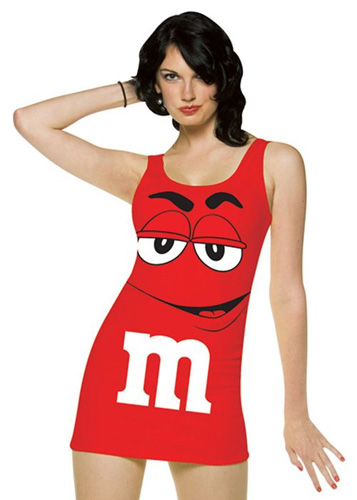 Let's start with candy. An M&M is pretty well-established as being a round candy. The costume is a round circle that you climb inside, right? Nope! For women, being an M&M means pulling on a short tank-dress with the M&M eyes superimposed over the chest.

'Skinny/red' isn't your only M&M costume option, ladies. The manufacturer (Rasta Imposta!) has graciously made a skinny blue M&M, a skinny green M&M, a skinny yellow M&M and a skinny orange M&M. You and your skinny friends can go out as a pack of misshapen M&Ms that's mysteriously missing the brown ones. I'll leave the implication of this as an exercise for the reader. 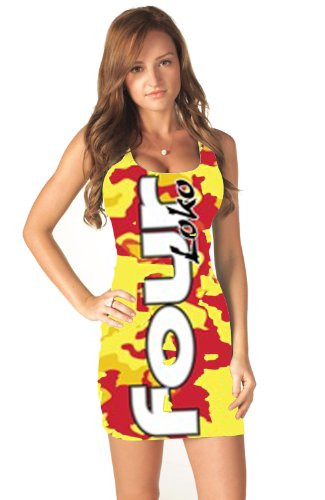 Rasta Imposta complements its sexy-candy costumes with a liquid line that includes sexy ketchup and sexy Coca-Cola. At least the Four Loko girl up there seems to be mildly irritated at the idea that a dress somehow counts as a real costume. 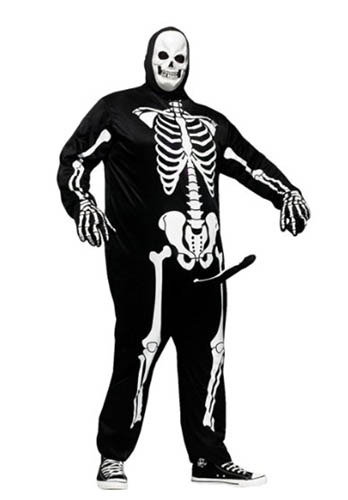 Men aren't left out of the objectification party, either. Their bodies might be covered, but chances are, they're covered in penis stuff. They can be a skeleton with a boner, or a snake charmer whose snake is actually his boner, or a guy wearing shorts with a boner. Or they can just be a boner. Limitless, really. 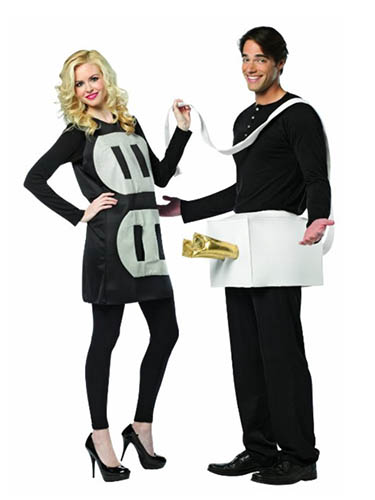 You see, evolutionarily speaking, everything is about sex. For human society to continue, we have to mate. So why dance around it with costumes like 'boner' and 'short dress with snarling candyboobs'? Just strap a plug around your waist and put your date in an electrical-socket sack!

Of course, you'll have to buy two sets if you want to go as a plug-and-plug or socket-and-socket pair. It's either casual heteronormativity or a profit angle. Or maybe it's both! Anything is possible on Halloween! You can be what you want, except brown or gay!!! 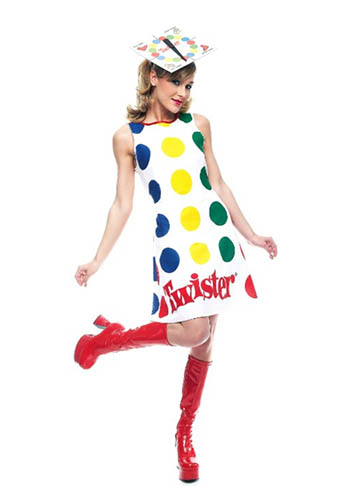 I'll leave you with one final horror. Remember Twister, the ancient contortion game that our elders played because they didn't have smartphones? It still exists, in costume form. The subtext, of course, is "spin my hat and then touch the colored dot that's on the Twister board, which is strapped to my body." Actually, that's not subtext; it's literally the rules of the game. The subtext is much more sinister.

There's also a children's version of this costume. Now you can send your daughter out into the night wearing a short dress that actively encourages people to plant their hands all over it! Got your grope-outfit on, dear? Okay, now keep a close eye on your little brother the mini-skeleboner! Here's a pillowcase. See you in two hours. Happy Halloween.