My hometown is absolutely godawful

Let me start off by saying that, yes, this really is my hometown. I was born there during the latter half of Reagan's first term, went to school there for 12 years and eventually moved the hell away since the only real options for advancement if you live in Flora, IL are moving away and hopefully doing something reasonably productive with your life, going into the meth business or buying a farm (either literally or, in the case of the meth business, metaphorically when your lab explodes taking you and your double-wide with it). 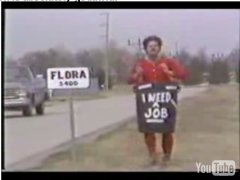 A photo taken at the corner of Bedlam and Squalor.A little background info so that you faithful readers can fully understand the horrors of this video: sometime around 1986 or 1987, the state of Illinois was looking for places to build a new prison. Since a new prison would expand the local job market to "meth producer, farmer or prison guard", Flora, IL immediately started lobbying for the prison in the way only Flora, IL could: a terrible, utterly worthless 80's rap music video. Hey! The Chicago Bears were doing it!

Rather than mock the video, I think I'll just give all of you a guided tour of my hometown because - and trust me here - that is where the real comedy is.

We start things off with a real bang: the words "Now Showing All We Want Sa Prison" on the local theater's marquee. The Flora Township Theater, by the way, is a testament to the utter failure of capitalism in middle America: it has closed, re-opened, closed, changed ownership, been scheduled for demolition, changed ownership, closed and re-opened somewhere in the neighborhood of 13,000 times. It has had hundreds of thousands of dollars dumped into it over the course of several changes of ownership for "renovations" and is still a disgusting mess. Currently, it's closed though its marquee (one of the few things that escaped renovation, as it's still the same marquee as shown in this video) still proudly announces that "Meet the Spartans" will be playing at 7 and 9. 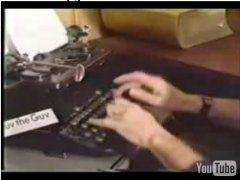 "Hum de dum. Oh hi there Bob. Yup, typin' up another suicide note. Might go through with it this time, too. How's the wife and kids? Looks like the Cubs won again last night. Welp, see ya later if I'm not hanging from the support beam in my garage."I actually worked there for a time while I was in high school. At the time, it was owned by a lumpy nerd who loved to quote Monty Python and the Simpsons and his enormously fat wife that referred to Asian people as "gooks" (i.e. "Goddamn, this town has a lot of fucking gooks in it!" after 1 Asian guy and 2 Hispanic girls came to the movies one night). I sold people tickets and popcorn that was popped using 2-week-old oil which smelled like what I like to imagine a pussy would smell like if it was attached to a girl with a BMI in the mid-40's.

I was never paid during the 2 months I worked there, since the previously mentioned fat nerd couple that owned it spent all their money on renovations and didn't have any left over for "paying employees". Eventually, they were indicted for fraud or something and skipped town. I didn't care though, because I got to watch movies for free since literally no one EVER came, and the owner would let me and the other unpayed employees watch the movies and eat the food.

As a result, I have seen Jurassic Park 3 nearly 40 times. I am not joking.

Eventually, we see the inside of the Flora Advocate Press, one of two local Flora Newspapers. The other newspaper, the Hometown Journal, was another place I worked while in High School. In fact, it was my first job; this was during the whole dot com boom of the late 90's/early 2000s, and I was hired to make them the website to end all websites. I was pretty handy with HTML and Java and figured I could make them a pretty decent website featuring news blurbs and maybe a message board where people could submit local news and events. Nothing hugely fancy, since all of 30 people would probably ever see it. The owner, on the other hand, had all sorts of grandiose ideas and his vision for the website was that it was going to be nothing short of the Citizen Kane of small town newspaper websites: 3d images! Movie clips (in an era when 56k was considered "high speed") Music! Games! Comics we didn't pay the licensing fee for! An online "journal" that predated the blog explosion by nearly 5 years!

The reality of the situation was that I was 15 years old and given an iMac with absolutely no web publishing software and told to have at it. I actually had to request that they connect my computer to the network because it's rather hard to "make an internet website for the internet" when you aren't connected to the internet. I was promptly sent out to buy a network cable with my own money.

On the plus side, I got my own office. On the down side, it was also the boss's office and he listened to Barry Manilow constantly. 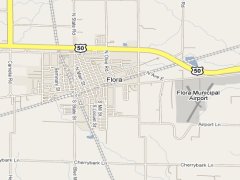 Oh, and there was also a video store who's claim to fame was that one time, some idiot kids that were working there hid their weed inside some of the VHS and DVD cases, and then got busted when someone rented those very movies and found the drugs.

The kids got probation. Speaking of probation:

Finally, we see "Bill the Probation Boss" or whatever. That would be Bill Ridgeway, the head honcho of the Clay County Probation Office for years and years. My mom worked there all through my childhood. Super nice dude, served as a marine on Iwo Jima during World War 2, and sadly died a few years back from cancer. Yikes, that was a bit somber for this article. Back to the jokes: did you know nearly 35% of the population between 18-39 in Clay County is on probation (mostly for drugs or domestic abuse-related charges)? It was my mom's job to set up appointments between those cretins and the probation officers, to make sure people came to their appointments and other assorted things that boiled down to "dealing with meth addicts for 8 hours a day, 5 days a week". She developed a drinking problem. I can totally see why.

Ugh. I'm going to stop writing because this is seriously bumming me out. As you can see, I left Flora for a pretty goddamn good reason, though I haven't touched on nearly half the stuff I could have. Like the time a new Wal-Mart Super Center was being built and the city of Flora paid over 6 million fucking dollars for the old, non-Super Center building, raised everyone's taxes to help account for the 6 million dollar hole in the budget and then, to date, still hasn't used the building for anything. 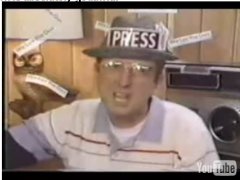 The brim of his hat is covering up the part that says "but not too hard, my skull isn't completely formed".Or the time my 9th grade math teacher got arrested for traveling across state lines to have sex with a male under the age of 14. He was in his 60's. And married.

Or the time they dismissed school early because a meth lab across the street exploded.

In the end, despite their ability to spit that hot fire gangsta shit, Flora never got that prison. It turns out that Illinois Governor Jim Thompson hated people upstaging him, and awarded the prison to some other bumfuck town after the people there sent his secretary flowers.

If the government ever resumes nuclear testing, I have a much better location than the Nevada desert in mind.