This isn't a confession from a serial killer... it's his LIFE

Ladies and gentlemen, Vennu Mallesh is a sick, sick man. This isn't so much a video as it is evidence. Sure, sure, on the surface it may look like a vaguely inspirational (if poorly written) song about living one's own life the way one chooses, but lurking under the botched English surface is a blackened, festering heart that pumps naught but venom and bile. Join me, won't you ,while I dissect his lyrics or, as the prosecution will inevitably call them, "Exhibit A". 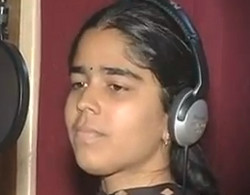 At least she died doing what she loved: being murdered and eaten by a pedophile.It starts innocently enough: "HahahahahahahahahaHEY are u [sic] going to sing?" asks a girl, whom I shall henceforth refer to as DAT SASH (because I am both culturally insensitive and only capable of relating to reality by way of internet memes from 2009), the lone voice of reason in a world and video gone mad. Vennu affirms that he is but, what's this? It's not a song he'll be singing, IT'S HIS LIFE! Presumably the marginally interesting (and ultimately horrifying) bits, as the first verse doesn't start with him detailing his time as a cumshot.

We then launch into asongER, SORRY I MEAN A LIFE that can't decide whether it wants to be a Eurodance track, a rock song, a dorky New Age snooze-fest or a T-Pain banger. Check out that schizophrenic-ass drum fill right before the singing starts. Hahaha. CLASSIC. But alas! Alack! Almost from the gate, things get terrible FAST:

"If u [sic] live like that do u [sic] know what people think about u [sic]?" asks DAT SASH. Vennu fills her in (much like he'll later be filling in part of her abdominal cavity WITH A KNIFE).

"People think that I'm some what mental / they don't know I am very sentimental / A friend of mine said I am a Waste Fellow / he don't know the taste of this fellow" (Some people think that Vennu is crazy (and rightfully fucking so). What they DON'T know, however, is that he is also sentimental, works for Waste Management and doesn't let his friends suck his dick. A policy I can certainly endorse) 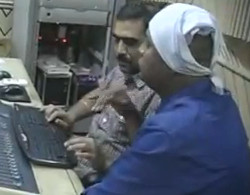 Chic headwrap or bandaged headwound from Vennu trying to eat his brains? I think we all know the answer."My teacher scolds me that I neglect Education / she don't know that I collect Real education / My neighbor thinks that I am wasting my time / he don't know that he is wasting his time" (Vennu is so somewhat mental(ly retarded) that, at the tender young age of 40+, he neglects his school work much to the chagrin of his teacher. Unbeknownst to her, he collects REAL education (that "THEY" don't want you to know about) which leads to a conflict with his neighbor over who is wasting who's time. Due to the rather adversarial relationship he shares with this unnamed neighbor, it can be assumed that Vennu may let him suck his dick, due to his staunch "No Friends" policy not being in effect here.)

"My mother sees me and she always bother / my father trusts me and treats me like his father..." (To the surprise of no one, Vennu has a really fucked up home life. His mother has crippling OCD and his father has dementia and mistakes Vennu for his own father.) 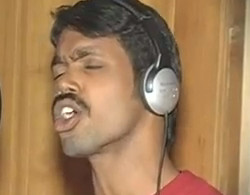 
"I am a brain eater / I am a heart stealer / I am a mind reader / I am a truth finder" (Vennu's terrible home life and dead-end job have ultimately resulted in severe psychosis. He feasts upon the brains of the living, rips their still-beating hearts from their chests and is having psychotic episodes that manifest as delusions of psychic ability.)

"I am a smart cheater / I am a pain killer / I am a good teacher / I am a perfect learner" (Even Vennu's long suffering wife isn't safe from his crippling mental illness. He cheats on her repeatedly and abuses painkillers, yet she is blissfuly unaware. Even in the depths of his insanity, Vennu seems to have some sort of insight into the lessons he's learned from the School of Hard Knocks."

"I am a back bencher / I am a new Sencer / I am a Kids lover / I am a soul builder" (As Vennu descends headfirst into madness, his speech becomes disjointed and erratic but he still manages to convey that he is a pedophile with delusions of Godhood.) 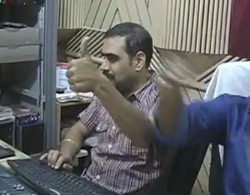 Thumbs up, Vennu! You are worse than TurboHitler and DoubleStalin combined!"I am very anger / I know it's very danger / I am a life driver / I am a routine changer" (If you or anyone you know has come into contact with Vennu Mallesh SEEK PROTECTION NOW. The only routine he plans on changing is "you being alive" to "you being dead and dismembered and partially eaten".)

"I am a rules breaker / I start a new chapter" (No comment necessary. Vennu is a raging sociopathic child molester murderer psychopathic abomination with no regard for rules nor capability for remorse.)

DAT SASH, perhaps attempting to defuse the situation, asks Vennu, Devourer of Souls what he wants to say in parting. Vennu responds: "Just leave every One / Believe only One / If u [sic] don't like any One / live alOne / Don't believe me / I am True Lier [sic]". (Vennu's motto is, in a nut shell, "If you don't like anyone, live alone". Taken to it's logical conclusion, this clearly means that Vennu intends to murder everyone on the face of the planet so that he can truly be "alone" with his demons. Finally, no doubt to have plausible deniability, he assures us that he is a liar. Vennu is one sick fuck.)